The Shintetsu Arima Line is a private railway line that provides access to the popular hot spring resort town of Arima Onsen. The line is run by Kobe Electric Railway which is called Kobe Dentetsu in Japanese or simply “Shintetsu” for short. 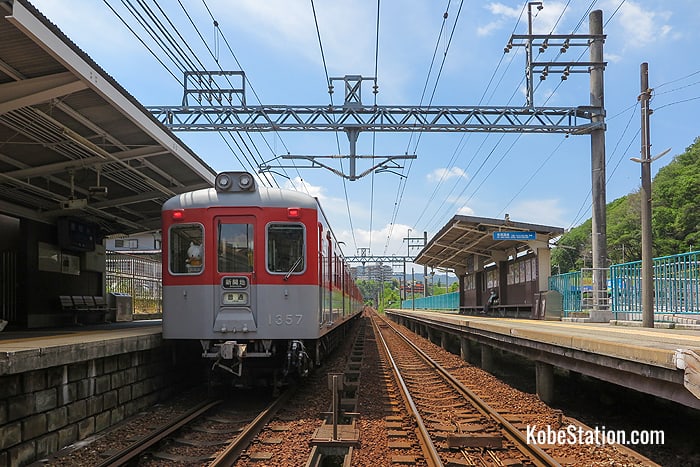 The Shintetsu Arima Line runs between Arima Onsen Station and Minatogawa Station. However, from Minatogawa the line is extended to Shinkaichi Station by a branch line of the Kobe Kosoku Railway network.

Including Shinkaichi Station there are 16 stations on the Shintetsu Arima Line. 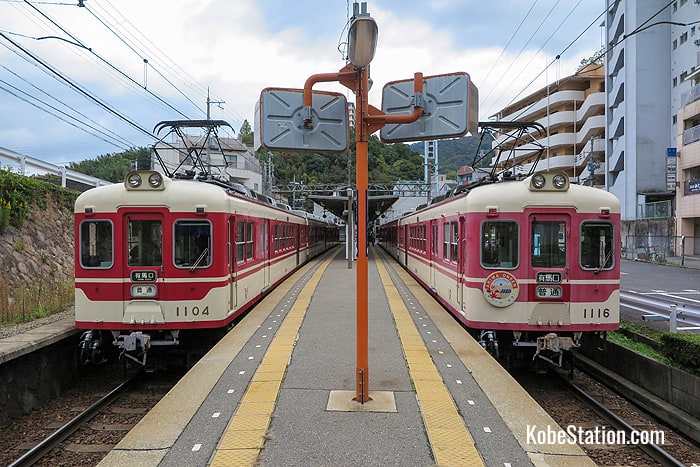 Passengers traveling from Sannomiya Station, or Shin-Kobe Station can access the Shintetsu Arima Line via the municipal subway system at Tanigami Station. 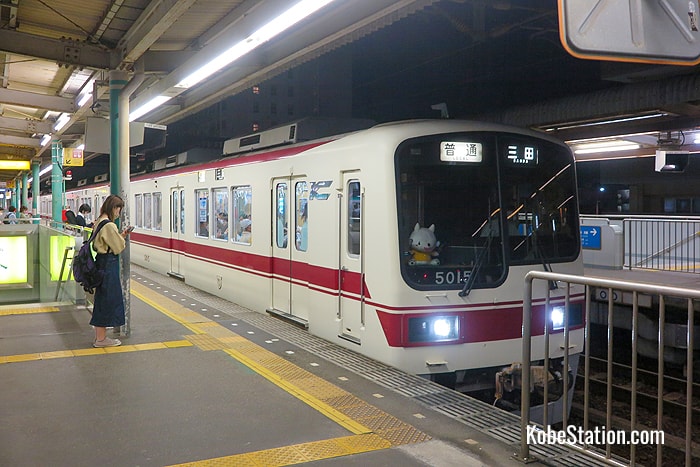 A train bound for Sanda at Tanigami Station

The key destinations and transfer points are listed below with example train fares and approximate journey times given from Shinkaichi Station. 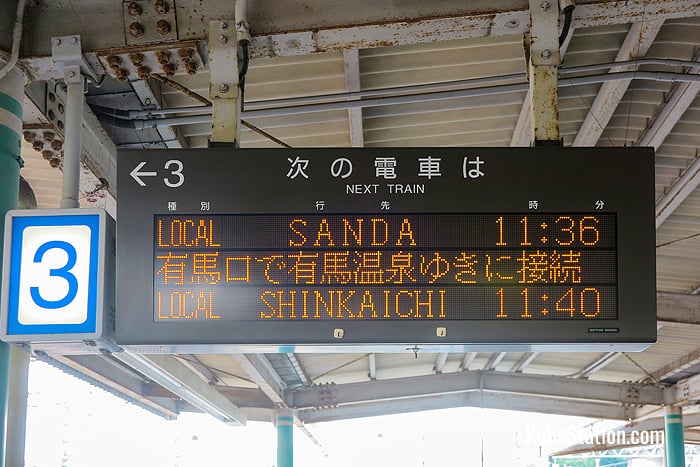 Shinkaichi Station is the southern terminus for services on the Shintetsu Arima Line. This station is part of the Kobe Kosoku Railway network which is shared by the Hanshin, Hankyu, and Sanyo railway companies. Passengers can transfer here to west-bound services for Suma, Akashi, and Himeji or east-bound services for Kobe-Sannomiya and Umeda.

This station is convenient for the street market Kobe Shinsen Ichiba. There are about 500 stores in this market which includes five connected shopping arcades with clothing and grocery stores as well as fresh food stores and stores selling traditional crafts, sweets, and tea. There are also plenty of street food stalls where you can buy snacks and either eat them on the spot or take them into nearby Minatogawa Park for a picnic.

Another nearby attraction is Minatogawa Zuido Tunnel which was built in 1901 to divert the course of the Minatogawa River and is the oldest river tunnel in Japan. This tunnel is no longer used as a waterway but is opened once a month to the public and sometimes used as a concert venue. Usually the tunnel is opened on the 3rd Saturday of the month between 13.00 and 17.00 with concerts taking place from 13.30 to 14.30. The tunnel is an 8-minute walk from Minatogawa Station, and admission is free. For the upcoming schedule (in Japanese) check the official Minatogawa Zuido website.

Transfer at nearby Minatogawa-Koen Station for services on the Seishin-Yamate Subway Line.

Exit here for Shiawase-no-Mura (or “Village of Happiness”), an extensive camping ground, with various recreational and sporting facilities along with barbecue areas and hot springs. A free shuttle bus runs from Suzurandai Station to Shiawase-no-Mura in just 15 minutes.

Transfer at Suzurandai Station to the Shintetsu Ao Line for services bound for the cities of Miki and Ono.

Suzuran-no-Yu is a popular hot spring day spa which is a 15-minute walk from Kita-Suzurandai Station. This spa has communal bathing facilities separated by gender which include the largest outdoor bathing area in Kobe set in an expansive garden, steam, stone, and herbal saunas, and massage facilities. The on-site restaurant serves a range of traditional Japanese dishes. 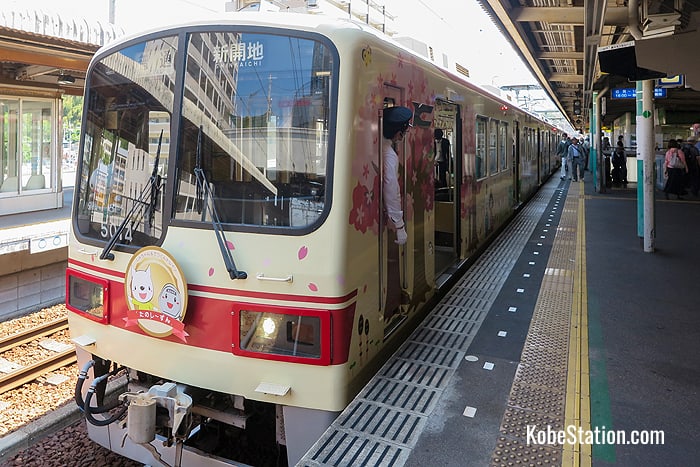 A train bound for Shinkaichi at Hanayama Station

Transfer here to the Hokushin Line for Shin-Kobe Station and through services for stops on the Seishin-Yamate Subway Line. 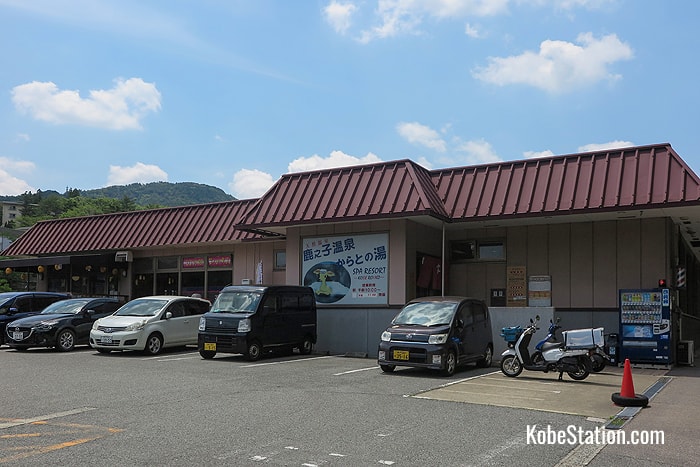 Exit here for Karato-no-Yu, a reasonably priced hot spring day spa with communal baths separated by gender. This spa features indoor and outdoor bathing areas, a sauna, and a variety of hot and cold mineral baths including jet baths, tea baths, and an electric bath that pulses with a light electric charge. After bathing you can enjoy simple but tasty meals in the dining area. Tickets for the baths and also for meals can be bought from ticket vending machines and then passed on to the staff. Karato-no-Yu is a 3-minute walk from the station.

Most through trains traveling from Shinkaichi Station will branch off here onto the Shintetsu Sanda Line. Passengers bound for Arima Onsen will usually have to change trains here. 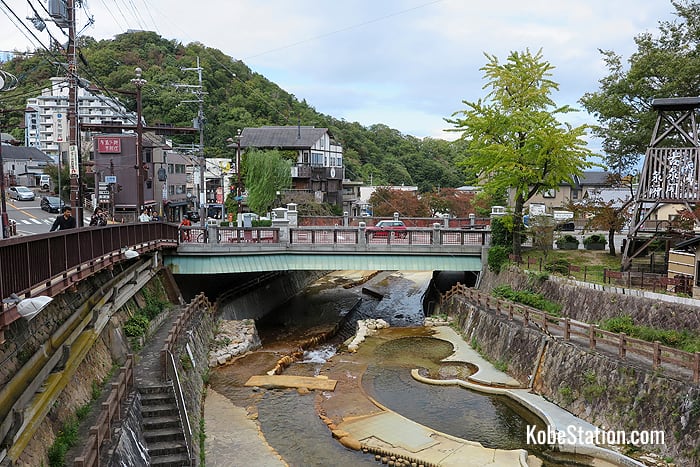 Arima Onsen is a famous hot spring resort town hidden away in the green hills of northern Kobe. This historic town features winding lanes leading to temples, shrines, and traditional wooden buildings which have been repurposed as restaurants, cafes, or stores selling local crafts. Visitors can enjoy bathing in natural mineral waters at one of the town’s two-day spas or stay overnight in a traditional hot spring hotel. Only a short distance from central Kobe, this is the perfect destination for a weekend getaway. 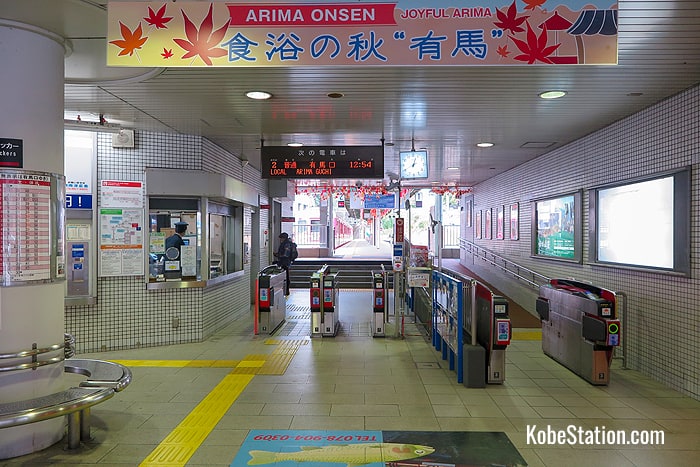 Traveling from Sannomiya to Arima Onsen

Passengers traveling from Sannomiya can buy a through ticket to Arima Onsen at Sannomiya Subway Station. This ticket will cover your journey from Sannomiya Station to Shin-Kobe Station via the Seishin-Yamate Subway Line, and from Shin-Kobe Station to Tanigami Station via the Hokushin Line. At Tanigami Station you can cross the platform and transfer directly to a Shintetsu Arima Line service, so you do not need to buy another ticket. Transfers are usually only necessary at Tanigami Station and Arimaguchi Station. The combined fare from Sannomiya to Arima Onsen is 680 yen and the travel time is about 38 minutes. To help plan your journey use the Japan Transit Planner or Hyperdia. 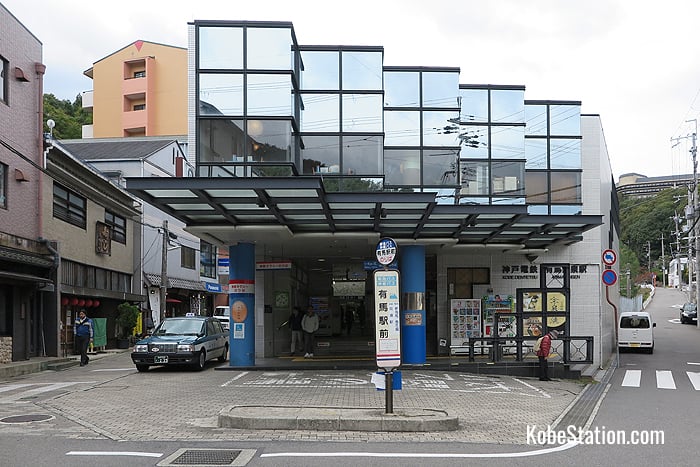