The Seishin-Yamate Line is a subway line in Kobe that runs between Shin-Kobe Station and Seishin-Chuo Station. This line is particularly useful for passengers who wish to move quickly between the Shinkansen terminus at Shin-Kobe Station and Sannomiya Station in central Kobe. However, there are also a lot of interesting attractions along this line which include shrines, museums, a street market, and a giant robot. 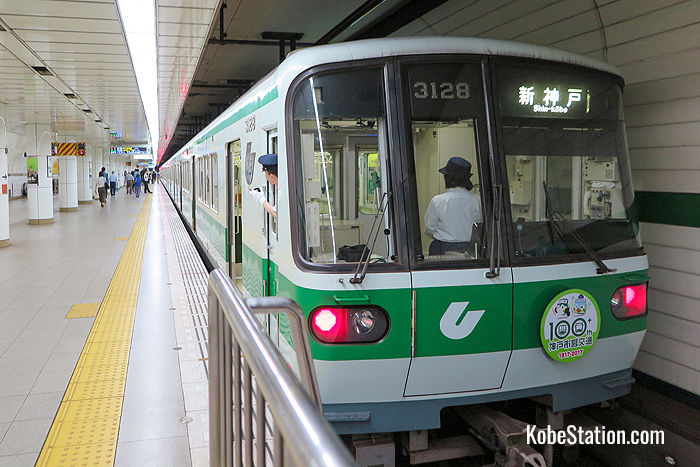 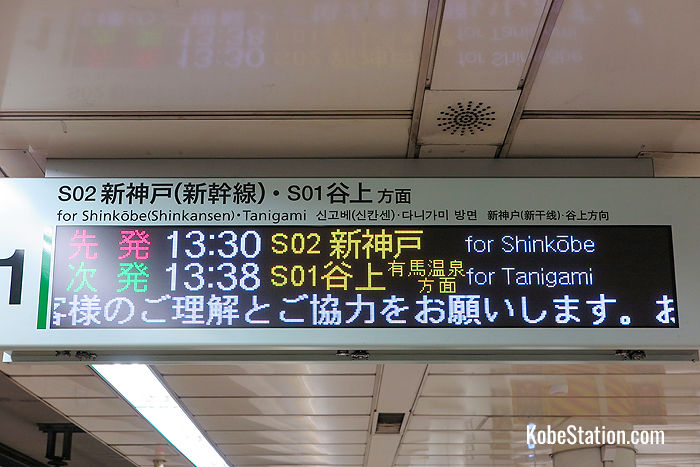 There are 16 stations on the Seishin-Yamate Line.

The key destinations on the Seishin-Yamate Line are listed below with example fares and journey times given from Shin-Kobe Station. 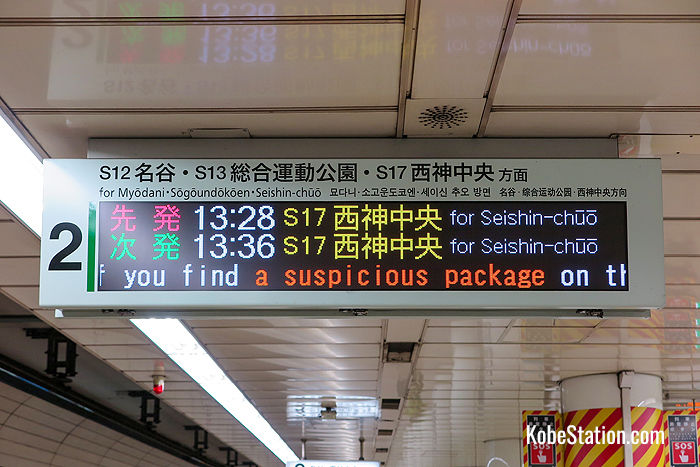 Another unusual attraction in this area is the Takenaka Carpentry Tools Museum where exhibits and models reveal the secrets of traditional Japanese carpentry and architecture. The museum, which is a 6 minute walk from Shin-Kobe Station, is open from 9.30 to 16.30 (with last entry at 16.00) and closed on Mondays and between December 29th and January 3rd. The cost of admission is 500 yen for adults, 200 yen for seniors, 300 yen for senior high and university students, and free for children of junior high age or younger.

Sannomiya is Kobe’s central district of commerce and entertainment with many shopping centers, restaurants, and bars. The main sightseeing attraction near Sannomiya Station is Ikuta Jinja Shrine, which is believed to date from the 3rd century and today is Kobe’s most popular shrine. The shrine is a 5 minute walk north of the Sannomiya Station.

Kobe City Museum is a 10 minute walk south of the station and its permanent exhibition of art and artifacts traces Kobe’s history as a focus of international exchange between Japan and other countries. The museum is open from 10.00 to 17.00 (with last entry at 16.30) and is closed on Mondays and from December 29th to January 3rd. The 1st floor historical exhibition is free to enter, while admission to the 2nd floor art collection costs 300 yen for adults, 150 yen for university students, and is free for children.

This station is a 2 minute walk from Sorakuen Garden. This is a traditional stroll garden with a pond, seasonal flowers and much greenery. The grounds of the garden also feature some historical structures such the Kodera Stables which date from 1910, Hassam House which was built by an Anglo-Indian trader in 1902, and the Funayakata building which is the gorgeous remnant of a 17th century pleasure boat. All three of these buildings are nationally designated Important Cultural Properties. Sorakuen Garden is open from 9.00 to 17.00 (with last entry at 16.30) and closed on Thursdays and from December 29th to January 3rd. The garden costs 300 yen to enter for adults and 150 yen for children.

Exit here for Minatogawa Shrine. This shrine is built on the site of the Battle of Minatogawa which was fought here in 1336, and it is dedicated to the spirit of the samurai Kusunoki Masashige. Kusunoki died in battle here, but is famous for his brave loyalty to the Emperor Go-Daigo. Despite its location in the center of the city, the shrine has large peaceful grounds and several impressive buildings. A handicraft flea market is also held here on the first day of every month except January. Minatogawa Shrine is a 3 minute walk south of Okurayama Station. A 2 minute walk to the west of the station is Kobe Bunka Hall, which is a large performance venue hosting traditional kabuki shows, Noh drama, and rakugo comic storytelling as well as chamber music recitals and other musical performances.

The exit from this station opens on to the southern entrance of the street market Kobe Shinsen Ichiba which is known as “Kobe’s Kitchen”. There are around 500 shops in the market which covers 5 connected shopping arcades and includes clothing and assorted grocery shops as well as fresh food stores and stores selling traditional crafts, sweets, and tea. There are also plenty of street food stalls where you can buy snacks and either eat them on the spot or take them into nearby Minatogawa Park for a picnic.

Another nearby attraction is Minatogawa Zuido Tunnel which was built in 1901 to divert the course of the Minatogawa River, and is the oldest river tunnel in Japan. These days the tunnel is no longer used as a waterway, but is opened once a month to the public and often used as a concert venue. Usually the tunnel is opened on the 3rd Saturday of the month between 13.00 and 17.00 with concerts taking place from 13.30 to 14.30. The tunnel is a 9 minute walk from Minatogawa-Koen Station and admission is free. For the upcoming schedule (in Japanese) check the official Minatogawa Zuido website.

Transfer at nearby Minatogawa Station to the Shintetsu Arima Line and the Kobe Kosoku Line.

This station is a 6 minute walk from Nagata Jinja Shrine. This shrine is believed to have been established by the legendary Empress Jingu in the 3rd century, and is dedicated to Kotoshironushi a god of business and industry.

Transfer to the nearby Kosoku-Nagata Station for the Kobe Kosoku Line.

This station is a 3 minute walk from the massive Tetsujin 28 Monument in Wakamatsu Park. Tetsujin 28 is a giant robot character in a manga series first created in the 1950s that was later made into a popular anime TV series, and marketed overseas as “Gigantor”. The 18 meter high, 50 ton statue is a monument to Mitsuteru Yokoyama, the creator of Tetsujin 28, who was born in Kobe, and also a tribute to the recovery of the city after the 1995 Great Hanshin Earthquake.

About 8 minutes to the south of the monument is small but colorful museum dedicated to Yokoyama’s works which is called Kobe Tetsujin Sangokushi Gallery (or “Kobe Iron Man Three Kingdoms Gallery”) which is free to enter and open 12.00 – 17.00. The museum is closed on Wednesdays and between December 30th and January 3rd.

Transfer at Shin-Nagata Station to the JR Kobe Line and the Kaigan Subway Line.

This station serves Kobe Sports Park which has multiple professional and amateur sporting facilities including the Universiade Memorial Stadium which is used for soccer and rugby matches, the Hotto Motto Field Baseball Stadium, the Kobe Green Arena which is an indoor facility, tennis courts, an outdoor swimming pool, and a children’s playground.

“Gakuentoshi” literally means “College Town” and this station is so named because it is surrounded by educational institutions such as Kobe City University of Foreign Studies, Kobe Design University, and Kobe City College of Technology.

Seishin-Chuo Station is the western terminus of the Seishin-Yamate Line. Kobe City Archaeological Center is an 8 minute walk south of the station. Its most celebrated exhibit is a 1,600,000 year-old Stegodon skeleton while other artifacts on display give insight into the lives of local people from ancient to medieval times. The center is open from 10.00 to 17.00 (with last entry at 16.30) and is closed on Mondays and between December 28th and January 3rd. Admission to the center is free although there may be a charge for special exhibitions. 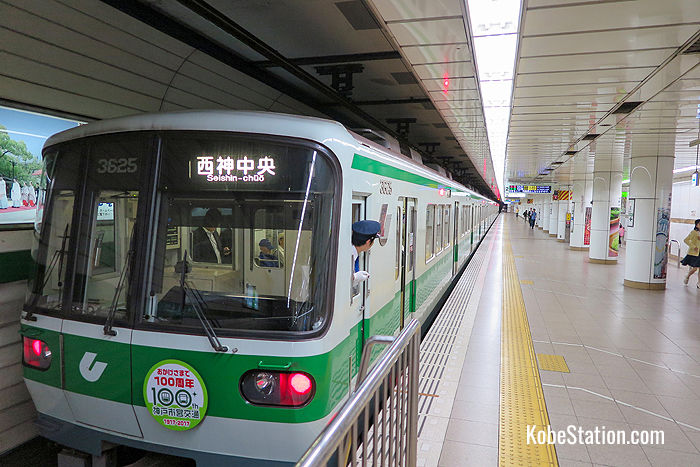 Tickets can be bought from automatic ticket machines beside the ticket gates in each station. The ticket machines are operated with touch screens and they have English and Japanese language options. 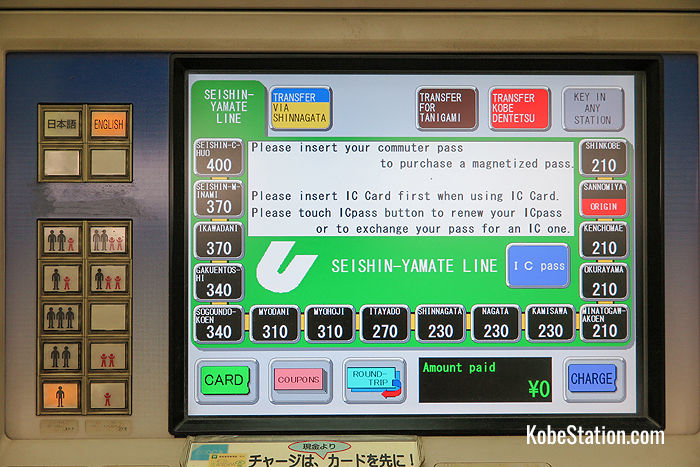 A ticket machine touch screen. The English language button is beside the screen on the left

Destinations with their fares are displayed on the touch screen which makes them very easy to use. There are also fare charts with the same information in English and Japanese above the ticket machines. 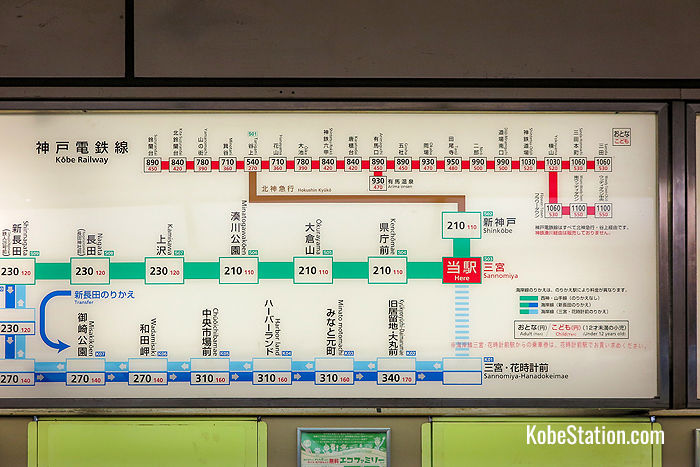 A fare chart above the ticket machines at Sannomiya Station

To buy a ticket you simply put your money into the machine and then select a destination on the touch screen.

A number of discount passes are available for use on Kobe’s subway and bus systems. For details please visit the Kobe City Transportation Bureau website. A bilingual subway route map for Kobe can also be downloaded from the same website. To plan your journey use English language route finders like the Japan Transit Planner or Hyperdia.