The Sanyo Shinkansen is a high-speed “bullet train” railway line operated by JR West between Shin-Osaka Station in Osaka and Hakata Station in Fukuoka, Kyushu. On the way it makes stops at major cities in western Japan such as Kobe, Himeji, and Hiroshima. 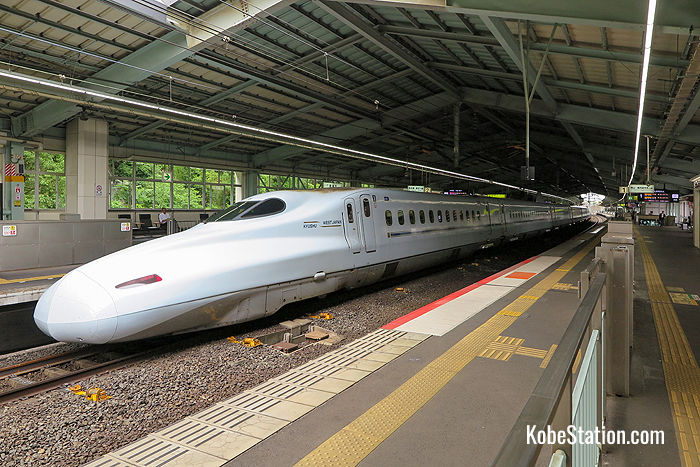 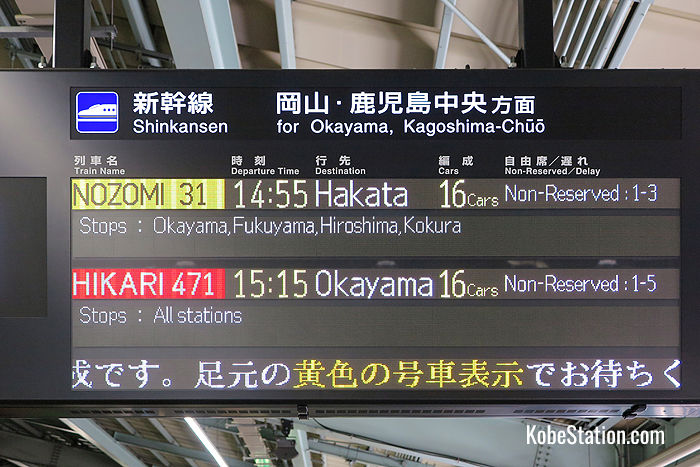 Trains traveling east from Shin-Kobe can reach Shin-Osaka Station in 12 minutes. Beyond Shin-Osaka many eastbound services continue on the Tokaido Shinkansen line, reaching Nagoya in 64 minutes, Shin-Yokohama in 2 hours and 29 minutes, and Tokyo in 2 hours and 47 minutes. 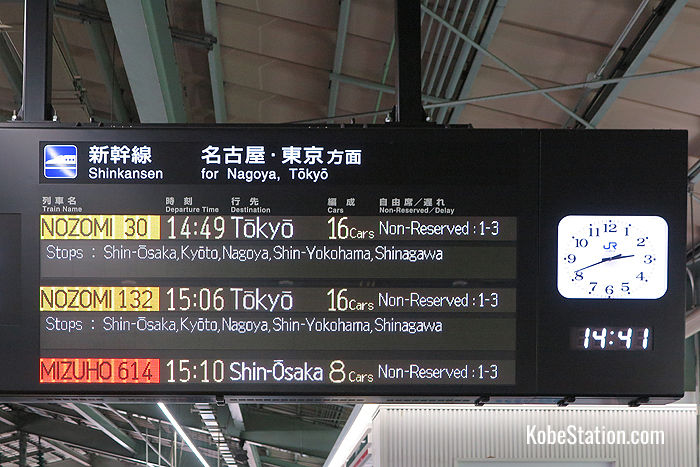 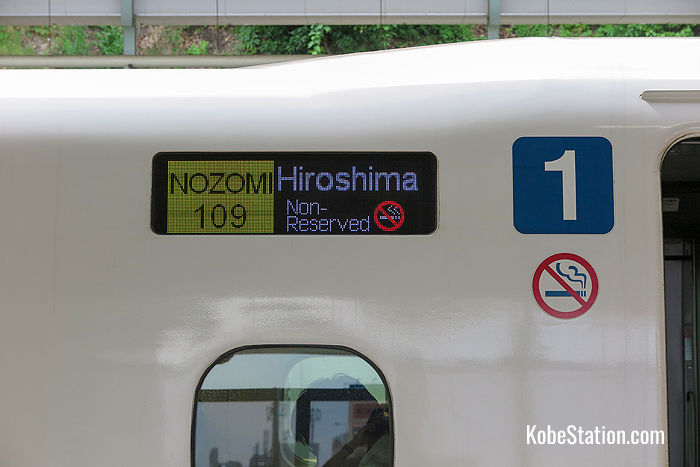 A carriage banner on the Nozomi Shinkansen train

There are 18 stations between Shin-Kobe and Hakata. 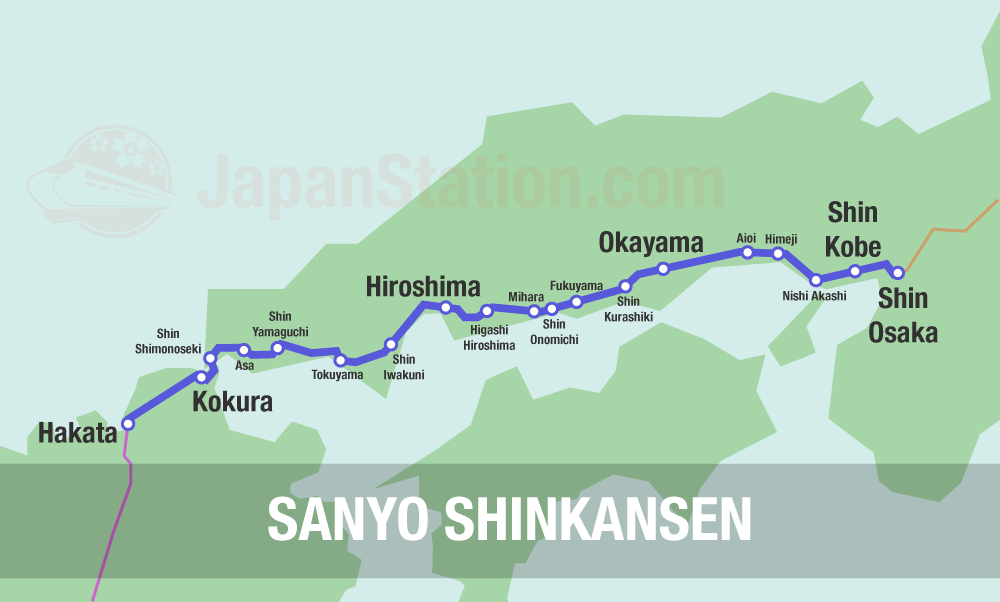 The key destinations are listed below with non-reserved fares given from Shin-Kobe Station.

Shin-Kobe Station serves the city of Kobe, the capital city of Hyogo Prefecture. Kobe is a friendly port city which is well-known for its cosmopolitan atmosphere. Its main attractions are Chinatown (also called Nankinmachi), Kobe Harborland, Meriken Park, Oji Zoo, Mount Rokko, and the Ijinkan, an area of foreign houses built in the 19th century. Shin-Kobe Station is especially convenient for the Shin-Kobe Ropeway which takes cable cars up to the Nunobiki Herb Garden on Mount Rokko. A famous series of waterfalls called the Nunobiki Falls can be reached from Shin-Kobe Station via a 20 minute woodland hike.

Transfer here to the Seishin-Yamate Subway Line for fast services into central Kobe. Passengers who wish to visit the hot spring resort town of Arima Onsen should transfer to the Hokushin Subway Line and transfer at Tanigami Station to the Shintetsu Arima Line.

Himeji’s most famous attraction is Himeji Castle. A UNESCO World Heritage Site, Himeji Castle is one of only 12 original medieval castles to have survived the last World War, and is nicknamed “White Heron Castle” because of its spectacular white walls. Other attractions in Himeji are the Kokoen Garden and the expansive mountain temple of Shoshazan Engyoji.

Exit here for Okayama Castle and the Korakuen Garden. Passengers who wish to visit the popular sightseeing destination of Kurashiki should transfer here to a local train on the Sanyo Main Line. Kurashiki is just 16 minutes from Okayama Station and features beautifully preserved traditional buildings, canal views and the Ohara Art Museum.

Transfers can also be made here to the Uno Line, Tsuyama Line, and Kibi Line.

This is the main station for Hiroshima, the capital city of Hiroshima Prefecture. The city’s history dates back to its establishment as a castle town in 1589. However, today the city is best known as the site of world’s first nuclear bombing. Locations that commemorate this tragic event are the Genbaku Atomic Dome, Hiroshima Peace Park and Hiroshima Peace Memorial Museum. Other sites of interest include Hiroshima Castle, the Shukkeien Garden and Hiroshima Art Museum. Hiroshima is also a good base from which to travel to Miyajima Island (also known as Itsukushima) with its famous sea-front shrine and giant torii gate, which at high tide is partially submerged in the sea.

Passengers who wish to visit Miyajima have two travel options from Hiroshima Station. The first is to transfer to the JR Sanyo Main Line and take a local train to Miyajimaguchi Station. It takes 28 minutes and costs 420 yen. The second way is to take a Hiroden tram on tramline #2 to Hiroden Miyajimaguchi Station. The tram takes 69 minutes and costs 270 yen. Both of these stations are close to the ferry port which has regular services for the island. Other transfers can be made at Hiroshima Station to JR West’s Kabe Line, Kure Line, and Geibi Line.

Shin-Iwakuni Station serves the city of Iwakuni in Yamaguchi Prefecture. The main attractions here are the mountaintop Iwakuni Castle which is reached by cable car, the elegant wooden arches of the 17th century Kintai bridge, cormorant fishing on the Nishiki River, and the white snake sanctuary in Kikko Park. These white snakes are found only in Iwakuni and are a designated national treasure.

This station serves the city of Yamaguchi, the capital city of Yamaguchi Prefecture. Yamaguchi’s best known attractions are the Zen garden of Joeji Temple, the contemporary Yamaguchi Xavier Memorial Church, and the five storied pagoda of Rurikoji Temple which dates from 1442 and is a registered National Treasure. Yamaguchi Prefectural Art Museum has a fine collection of oil paintings, sculptures, photography, and traditional Nihonga paintings, all by artists with a connection to Yamaguchi Prefecture. The Nihonga gallery is notable for having a tatami mat floor so that visitors can take their shoes off and sit on the floor just as they would in a traditional Japanese home. Passengers who wish to travel to either the historic samurai town of Hagi, or the limestone caves of the Akiyoshidai Plateau can reach them by bus services from Shin-Yamaguchi Station.

Kokura Station is the main railway station of Kitakyushu City in Fukuoka Prefecture. As the most northerly city of Kyushu it acts as a gateway between the islands of Kyushu and Honshu. Its best known attractions are Kokura Castle which is a 1950’s reconstruction containing a local history museum, and the waterfront Mojiko Retro district with its museums, cafes, galleries and antique buildings. Hourly buses run from Kokura Station to Kitakyushu Airport. There are also ferry services from Kitakyushu to major cities on the islands of Shikoku and Honshu as well as to South Korea.

Hakata Station in the city of Fukuoka is the final stop on the Sanyo Shinkansen line. Fukuoka is Kyushu’s largest city and Hakata Station is Kyushu’s largest and busiest station. The city’s major attractions are the hilltop Fukuoka Castle ruins, the Fukuoka Art Museum which displays both modern and pre-modern art, and Ohori Park which features a large pond, traditional gardens and is a nationally registered Place of Scenic Beauty.

Beyond Hakata only the through trains Sakura and Mizuho continue on the Kyushu Shinkansen line.

The top attractions in the city of Kumamoto are Kumamoto Castle, Suizenji Garden, and Kumamoto Prefectural Museum of Art. Kumamoto is also a good base for visits to nearby Mount Aso and Aso Kuju National Park.

This is the southern terminus of the Kyushu Shinkansen line and an important railway station in the city of Kagoshima. Kagoshima is a scenic bayside city at the south western tip of Kyushu. The city has been nicknamed the “Naples of the East” because of its warm climate and its location across the bay from the active Sakurajima volcano. Ferries to Sakurajima are a 10 minute walk from Kagoshima-Chuo Station. Other attractions include the Sengan-en Garden, the Museum of the Meiji Restoration, and the Reimeikan museum. 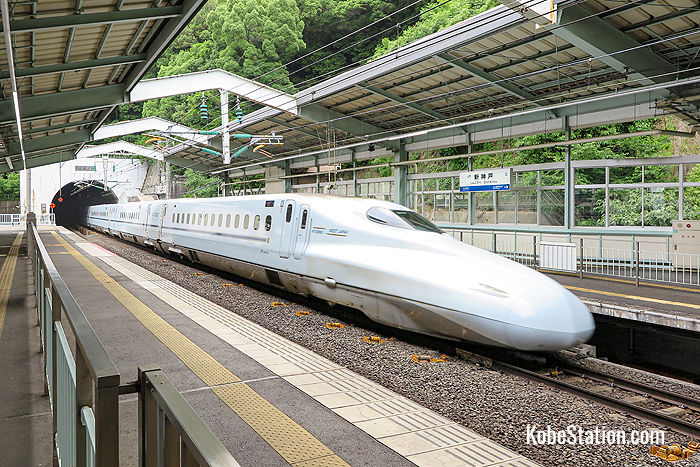 Shin-Osaka Station is the only stop east of Shin-Kobe on the Sanyo Shinkansen. However, most eastbound trains are through services that continue on the Tokaido Shinkansen as far as Tokyo. There are 18 stations between Shin-Kobe and Tokyo.

The key destinations are listed below with non-reserved fares given from Shin-Kobe Station.

If you are travelling by shinkansen, Shin-Osaka Station is your gateway to the city of Osaka. Osaka’s top attractions include Osaka Castle, Shitennoji Temple (Japan’s oldest temple), Sumiyoshi Taisha (an ancient Shinto shrine founded in the year 211), the bright lights of the Dotonbori entertainment district, and the theme park at Universal Studies Japan (USJ).

At Shin-Osaka station passengers can connect with the Midosuji Subway Line, the JR Kyoto Line, and the JR Osaka Higashi Line.

Kyoto is one of Japan’s best preserved historical cities and is famous for its many traditional temples, shrines, palaces and gardens. Major tourist attractions in Kyoto include the Golden Pavilion of Kinkakuji Temple, Fushimi Inari Taisha Shrine, and the bamboo forest of Arashiyama are major tourist attractions. Kyoto is also well-known for its traditional cuisine and riverside dining, as well as its more modern architecture such as Kyoto Tower, and the Kyoto Station building.

Shin-Yokohama Station is the Shinkansen terminus for Yokohama: a major port city located to the south of Tokyo. Yokohama’s top attractions include the observation deck in the Landmark Tower, the Minato Mirai seafront area, the historic western-style buildings of the Yamate district, the Sankeien Garden, and the Chinatown district with hundreds of Chinese restaurants.

Tokyo is Japan’s capital city and most populous metropolis. Popular attractions include the observation decks of Tokyo Skytree and Tokyo Tower, Asakusa’s Sensoji Temple, the zoo, museums and cultural facilities of Ueno Park, the wooded shrine of Meiji Jingu, the gardens of Shinjuku Gyoen Park, the fashion boutiques of Harajuku and Omotesando, the nightlife of Roppongi and Shinjuku’s Golden Gai, and the bright lights of Shibuya Crossing.