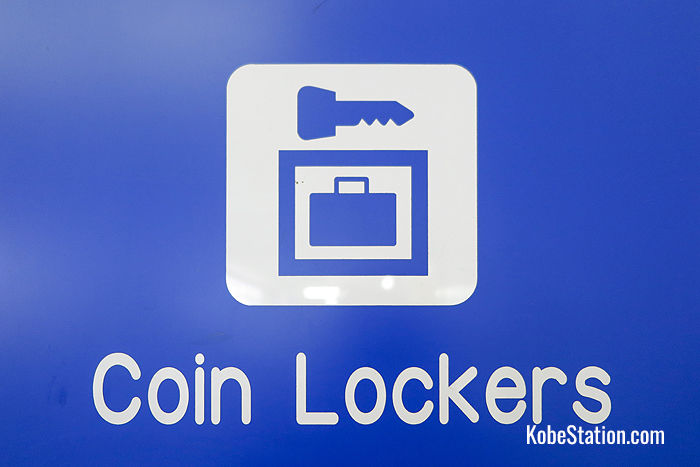 How to Use Station Lockers

Most of the lockers at Kobe-Sannomiya are key lockers and are very easy to use. You simply put your baggage into the locker, shut the door, pay the required number of 100 yen coins, and then turn the key. Of course you should remember to take the key with you. 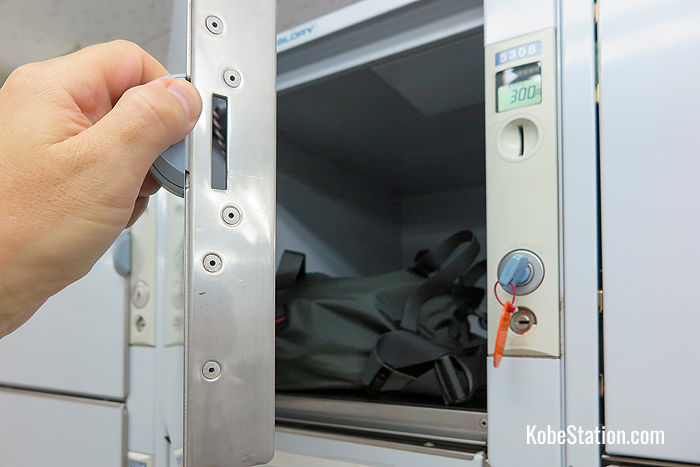 Put your bag in the locker 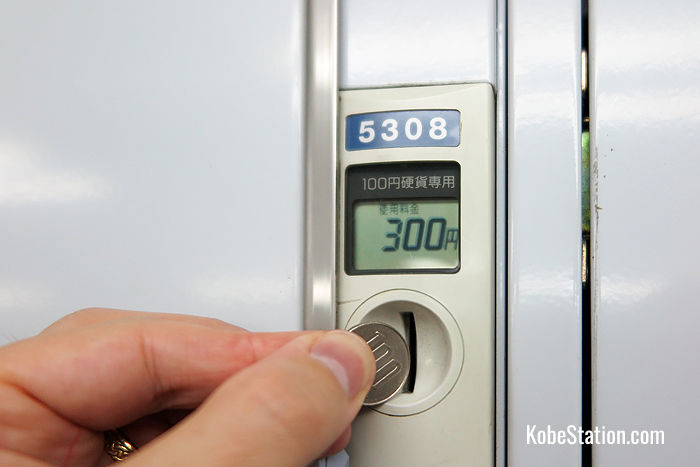 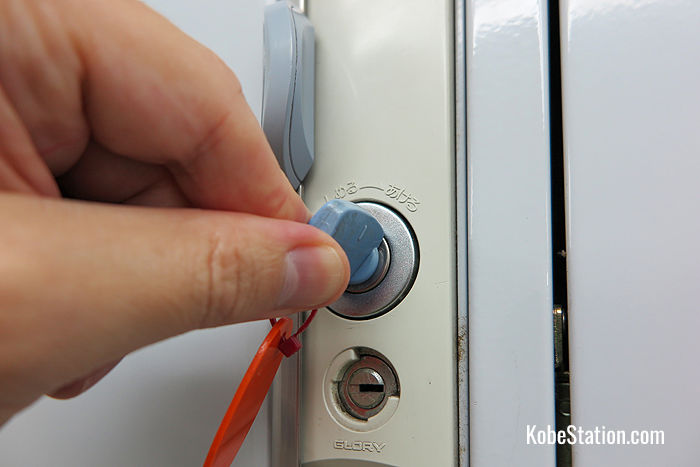 Turn the key and take it with you

You may also find more modern automatic lockers which are operated by multilingual touch screens. These are also easy to use and have Japanese, English, Chinese, and Korean options. Simply choose your language and then follow the instructions on the screen. 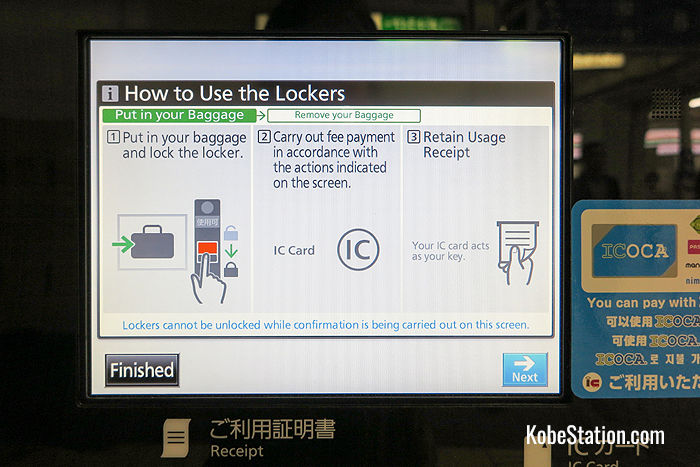 Lockers generally come in three sizes: small, medium, and large. These are priced variously according to the locker type and location but prices usually range between 300 and 900 yen. 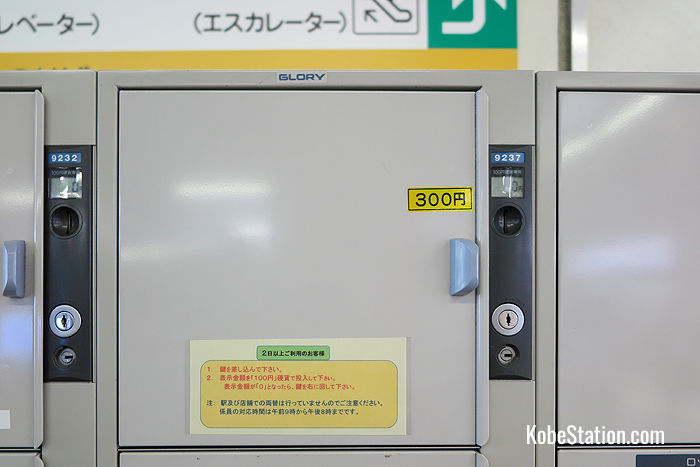 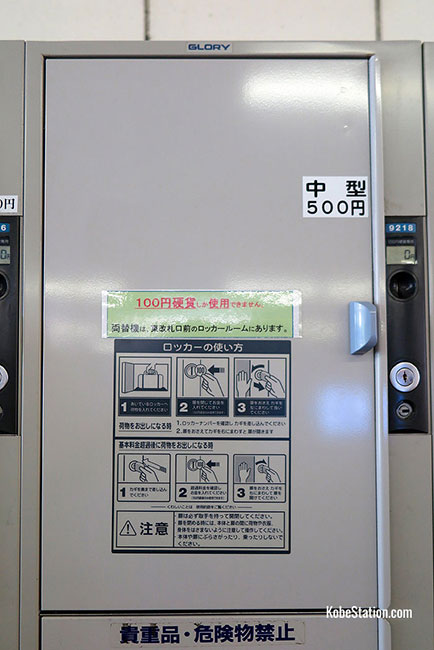 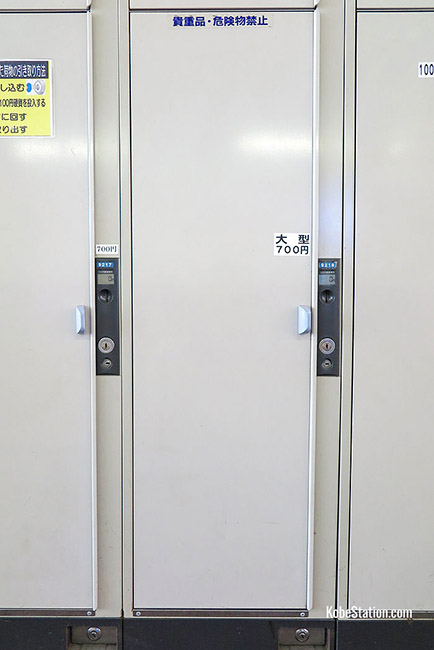 Larger lockers can be priced between 700 and 900 yen 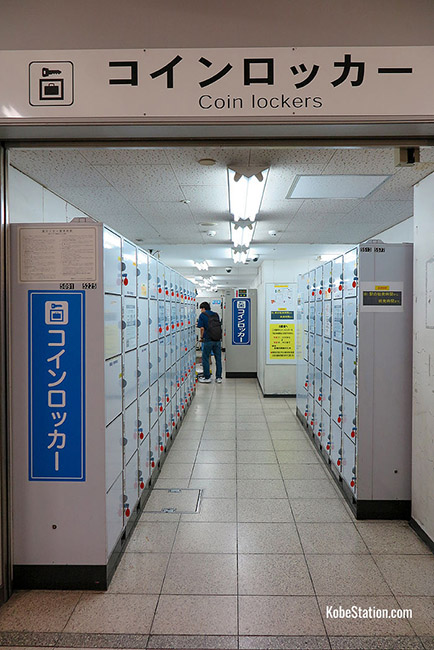 The coin locker room by the East Ticket Gates

The coin locker room has a change machine. Simply put a 500 yen coin or 1,000 yen note into the machine and it will change it into the correct amount of 100 yen coins. 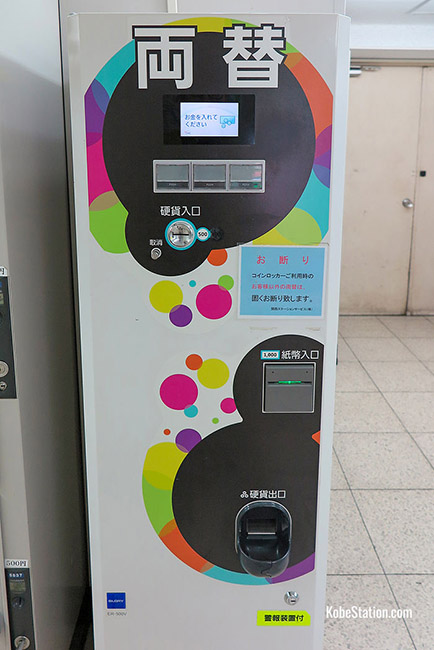 There is a bank of key lockers priced at 300 yen, 500 yen and 700 yen by the side of the escalators that are opposite the Central Ticket Gates. 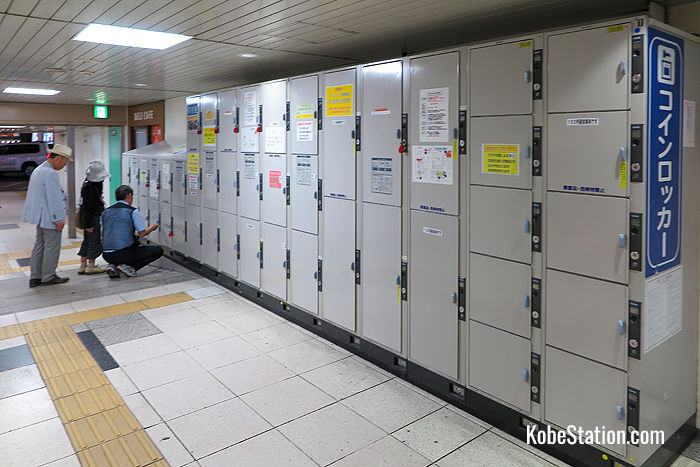 Coin lockers across from the Central Ticket Gates

Go down the stairs across from the West Ticket Gates and you will find some key lockers priced at 300 yen and 700 yen. 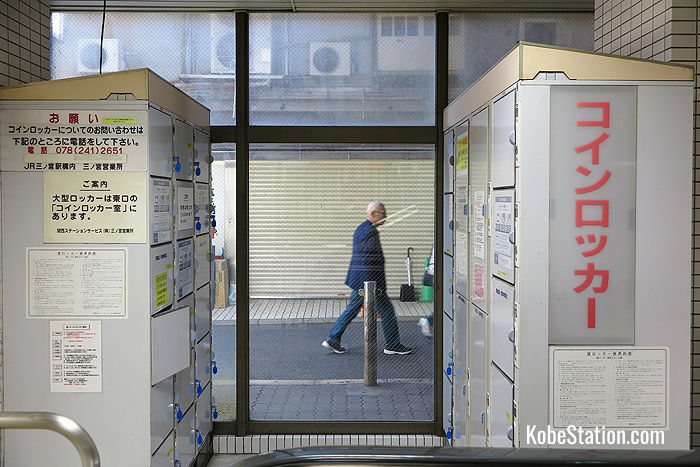 You will also find several banks of lockers at intervals in the passage that runs along the south side of JR Sannomiya Station. There are key lockers in this passage that are close to the East Ticket Gates and these are priced at 300, 500, and 700 yen. 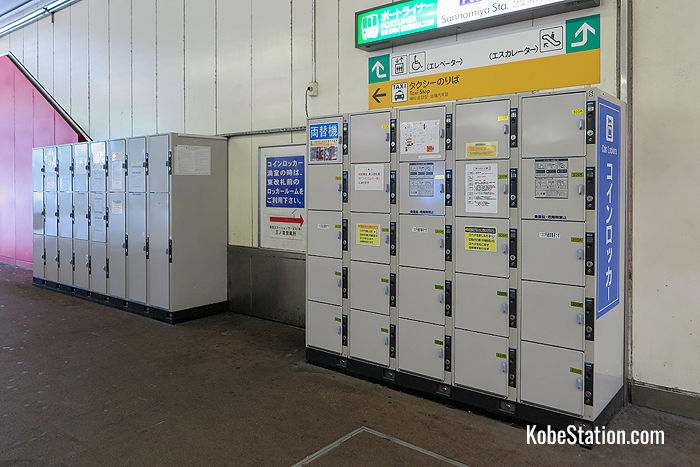 Key lockers in the passage close to the East Ticket Gates

Further along this passage on the other side of the escalators that lead up to the Port Liner station, you can find a much larger bank of key lockers priced at 300, 500, and 700 yen. There are also some automatic lockers here priced at 500 yen which can only be used with an IC card. 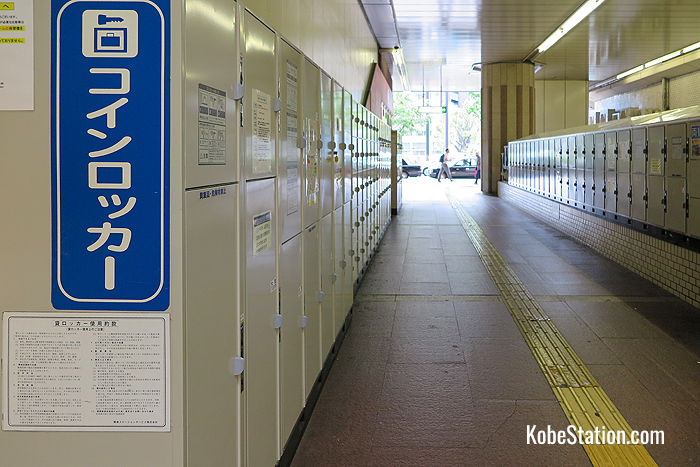 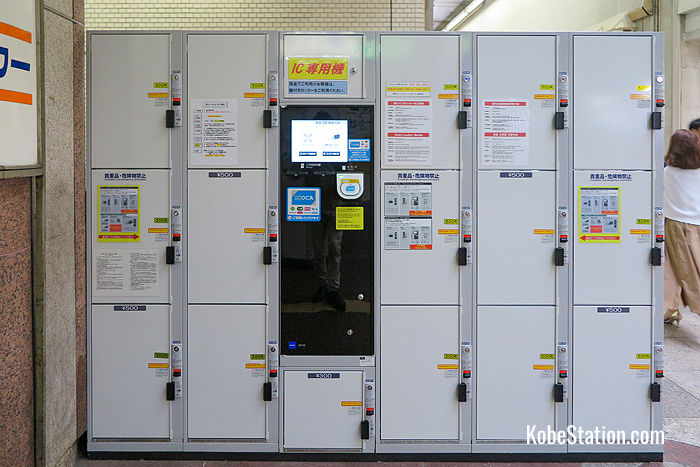 These automatic lockers can only be used with an IC card

Walk a little further along this passage, past the Central Concourse and you will find another bank of key lockers priced at 500 yen and 700 yen. 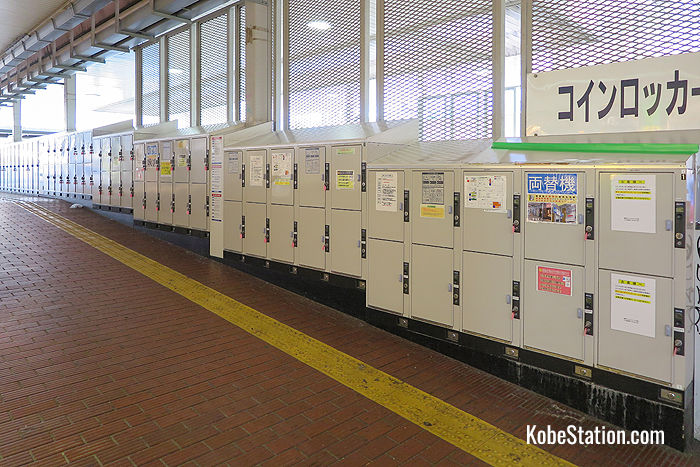 Hankyu Kobe-Sannomiya Station has key lockers on the 1st floor at both its East Entrance and West Entrance. At both locations the lockers are priced at 300, 500 and 700 yen. 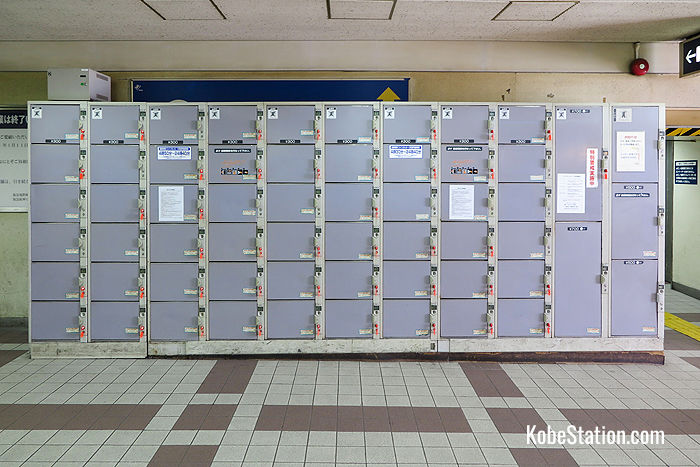 At the West Entrance look for the lockers behind and at the side of the stairs. 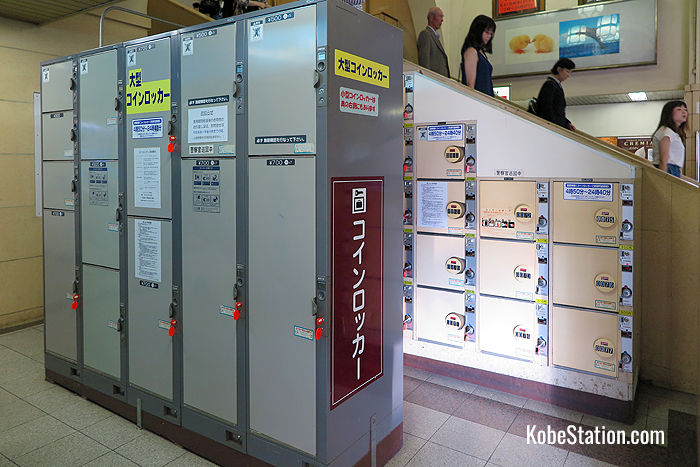 Hanshin Kobe-Sannomiya Station doesn’t have many lockers and they are all located inside the ticket gates. You can find a small number of key lockers inside the East Ticket Gates priced at 300, 600, and 700 yen. 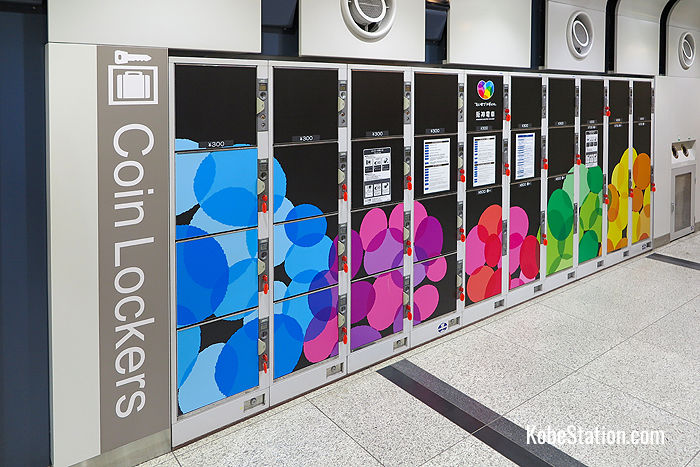 At Port Liner Sannomiya Station you can find a small number of key lockers just inside the ticket gates. These are priced at 300, 500, and 700 yen. 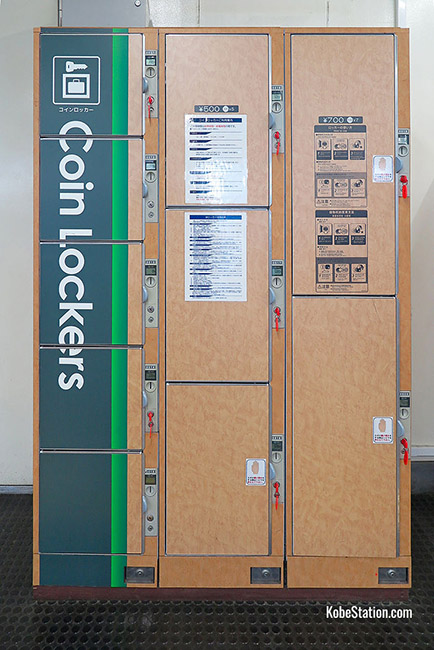 At Sannomiya Subway Station you can find key lockers outside the ticket gates. These are priced at 300 and 500 yen. 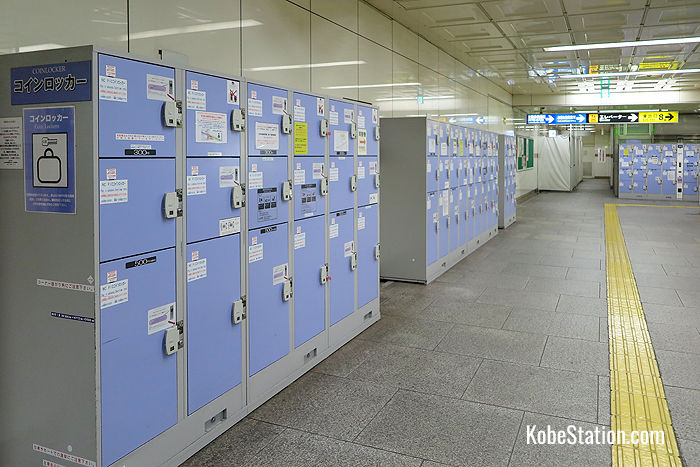 At Sannomiya-Hanadokeimae Subway Station you can find key lockers outside the ticket gates. These are priced at 300 and 500 yen. There are also some refrigerated lockers here priced at 300 yen which you can use to store food. 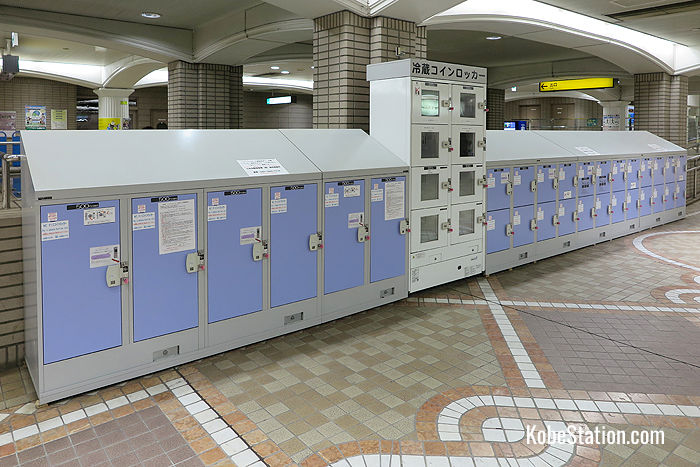 There is a cloak room at the Service Station on the 1st floor of the Sogo department store’s main building. This building stands directly above Hanshin Kobe-Sannomiya Station. The cloak room service is available during the store’s opening hours from 10.00 till 20.00. There is no limit to the size of the baggage you can leave at this cloak room, and there is no fee. Strictly speaking this service is available to customers of the Sogo store so that they can freely enjoy shopping without having to carry lots of baggage around. However, you are not obligated to buy anything if you use this service. 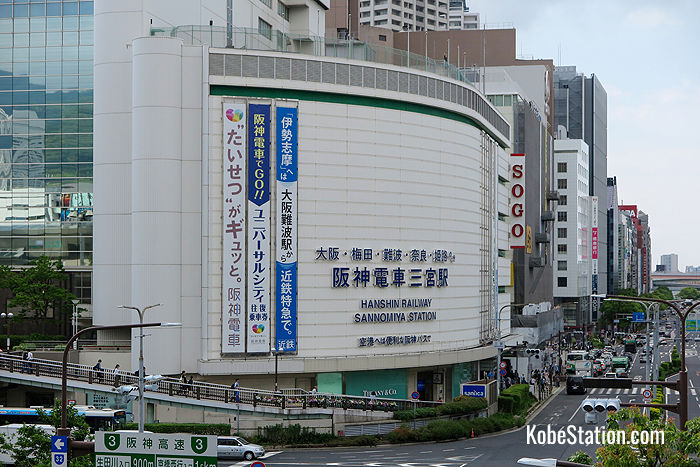