The Hanshin Main Line is a railway line that connects the two cities of Kobe and Osaka. The line runs from Motomachi Station in the city of Kobe to Hanshin Osaka-Umeda Station in Osaka, and stops along the way at several important stations such as Kobe-Sannomiya and Koshien. This line is operated by the private Hanshin Electric Railway, so it is not covered by the Japan Rail Pass. However, if you do not have a Japan Rail Pass, the Hanshin Main Line is a cheaper option. Alternative discount passes for the Hanshin Railway can be found at the end of this article. 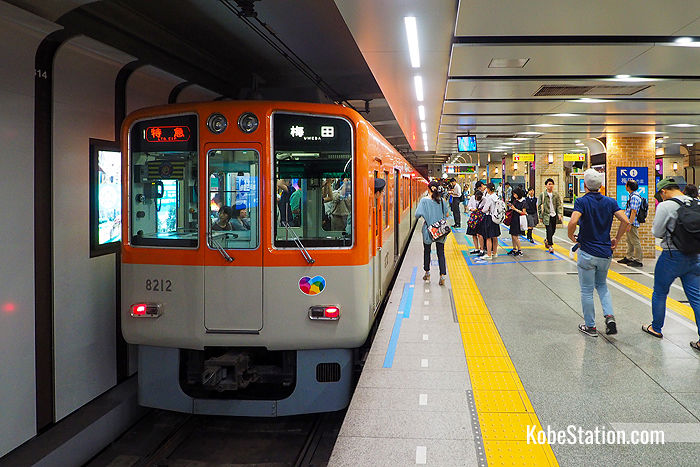 There are 33 stations on the Hanshin Main Line between Motomachi Station in Kobe and Hanshin Osaka-Umeda Station.

Kobe-Sannomiya Station serves central Kobe and Osaka-Umeda Station is one of the main entry points for the city of Osaka. Aside from those major stations, the most popular destinations on this line are probably Motomachi Station for Kobe Chinatown, Mikage Station for Mount Rokko, and Koshien Station for the Koshien Stadium. All of the key destinations and transfer points are listed below with example fares and journey times given from Motomachi Station.

This station in Kobe is close to the Motomachi Shopping Street, and to Kobe’s Chinatown (also called Nankinmachi). The seafront recreational area Meriken Park is a 15 minute walk from Motomachi Station. Here you can find Kobe Maritime Museum and Kobe Port Tower. Transfers can be made here to the Kobe Kosoku Line and the JR Kobe Line. 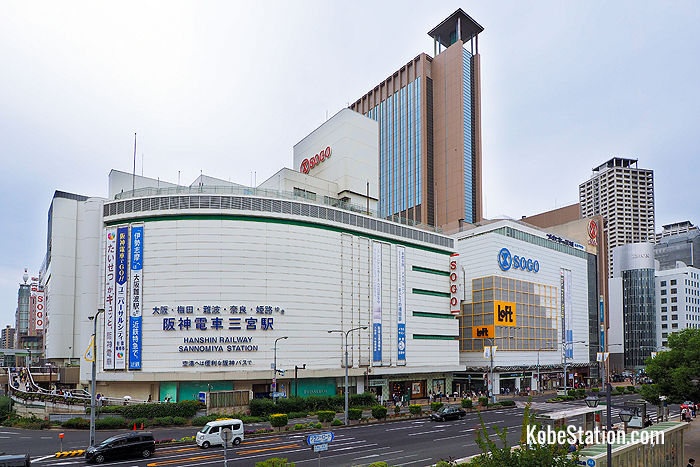 Kobe-Sannomiya Station is located beneath Sogo Department Store in Sannomiya 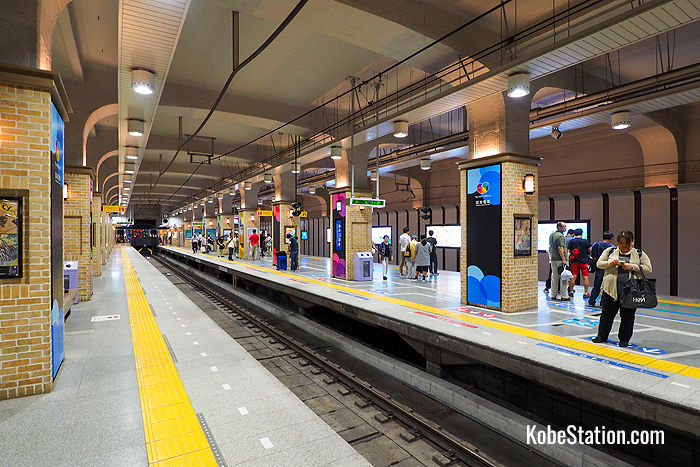 The main sightseeing attraction here is Ikuta Jinja Shrine, which is said to date from the 3rd century and is one of Japan’s oldest shrines. Kobe itself is a friendly and cosmopolitan port city. Its other main attractions are Mount Rokko, Kobe Harborland, and the Ijinkan, an area of foreign houses built in the 19th century. 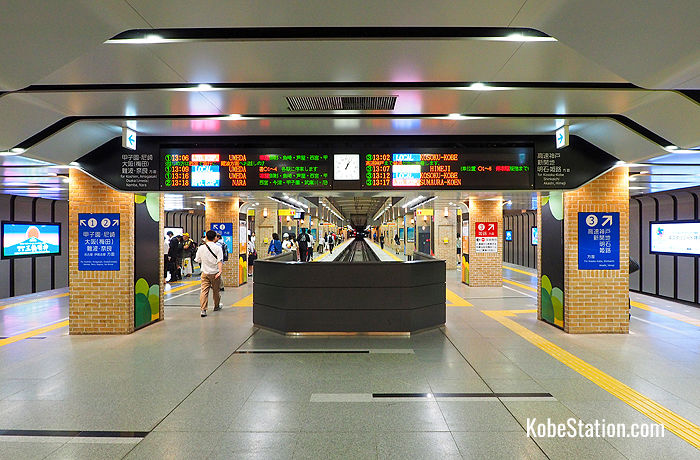 Transfers can also be made in Sannomiya to the Seishin-Yamate Subway Line which has services bound for Shin-Kobe Station and to the Port Liner which serves Port Island and Kobe Airport.

Iwaya Station is convenient for Hyogo Prefectural Museum of Art which was designed by the acclaimed architect Tadao Ando and exhibits a major collection of sculptures, prints, and paintings. Kobe Oji Zoo is a 10 minute walk north of this station. This station is also close to Nada Station on the JR Kobe Line.

This station is a 4 minute walk from Maya Station on the JR Kobe Line.

Exit here for the popular sightseeing and hiking area of Mount Rokko. Buses from the station take passengers to the Rokko Cable Car which will take you up Mount Rokko. At the top there is an observation deck with views over the city, and facilities such as terrace dining, an alpine botanical garden and a music box museum!

This station is convenient for Hakutsuru Sake Factory and Museum which has displays of both modern and traditional sake making tools and techniques and a sake tasting area. JR Sumiyoshi Station on the JR Kobe Line is a 12 minute walk north of this station.

Transfer here to the Hankyu Imazu Line for Takarazuka.

This is the most convenient station for Koshien Stadium. This baseball stadium is the home of the Hanshin Tigers baseball team, and the host of the annual National High School Baseball Championships. Koshien was founded in 1924 and is Japan’s oldest baseball stadium. Baseball fans can visit a museum on site.

Transfer here to the Hanshin Namba Line for Namba and Nara.

Transfer here to the Osaka Loop Line and to the nearby Shin-Fukushima Station for the JR Tozai Line.

Umeda is also a major transportation hub with several railway stations and a highway bus terminal. Transfers can be made at Osaka Station to the following JR train lines: the Osaka Loop Line, Kansai Airport Line, Yamatoji Line, Hanwa Line, Takarazuka Line, Kobe Line, and Kyoto Line. Transfers can also be made at nearby Osaka-Umeda Subway Station to the Midosuji Subway Line and at Hankyu Osaka-Umeda Station to Hankyu Railway’s Kobe Line, Kyoto Line, and Takarazuka Line. 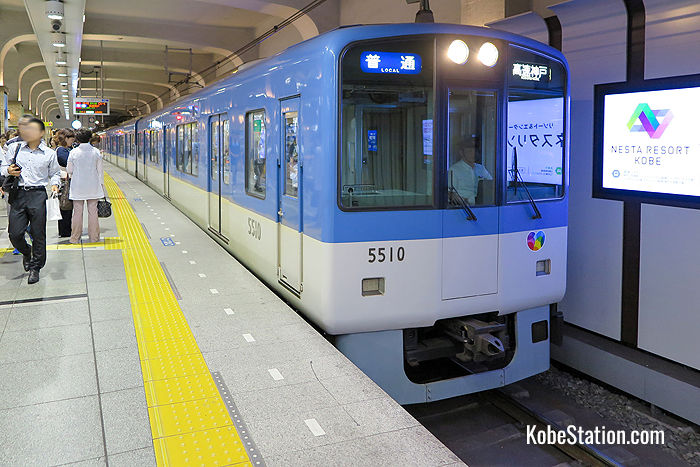 In addition to the Hanshin Main Line there are two other competing rail lines that connect Kobe and Osaka: the JR Kobe Line and the Hankyu Kobe Line. All three of these lines have convenient stations in Kobe’s Sannomiya district and in Osaka’s Umeda district. Let’s compare their services.

The JR Kobe Line provides the fastest service between JR Sannomiya Station and Osaka Station in Umeda at 21 minutes by Special Rapid Train. It is also the most expensive service at 410 yen. However, this line is covered by the Japan Rail Pass. Because the Hankyu and Hanshin Railways are private railway companies you cannot use the Japan Rail Pass on their lines.

A Limited Express on the Hanshin Main Line will get you from Hanshin Kobe-Sannomiya Station to Hanshin Osaka-Umeda Station in approximately 30 minutes for 320 yen. This is cheaper than the JR service but pretty much the same as a Limited Express on the Hankyu Kobe Line which covers the same distance in roughly 29 minutes for 320 yen. There isn’t really much difference between the two private lines, but in Kobe the Hanshin station is in a slightly better position for areas to the south of Kobe-Sannomiya, and the Hankyu station is a little more convenient for areas to the north.

Hanshin Electric Railway is a private company, so it is not covered by the Japan Rail Pass. However, various discount passes are available for travel on Hanshin lines which include several tickets and coupons specially tailored for exploring Kobe. For detailed information on discount passes for the Hanshin Electric Railway download the official guide to economical tickets.

Visitors from overseas can also get a Kansai Thru Pass (also called the Surutto Kansai Pass) for two or three days. This covers not only the Hanshin Electric Railway but many of the private railways, buses and subway systems in Osaka, Kyoto, Kobe, Nara and Shiga. This pass cannot be used on JR Railways however. Visit the Kansai Thru Pass website to find out more.

A downloadable route map of the Hanshin Railway network can be found on their official website. We recommend English language online route finders like the Japan Transit Planner or Hyperdia to help you plan your journey.