Kobe Chinatown, also called Nankinmachi, covers a small area, but it is packed with Chinese restaurants, street food stalls, and souvenir shops. Nankinmachi is one of three Chinatowns in Japan along with those in Yokohama and Nagasaki, and it is one of Kobe’s major tourist attractions. In this article we will introduce the area’s history, the main architectural sights, its festivals, and the best places to eat authentic Chinese food. 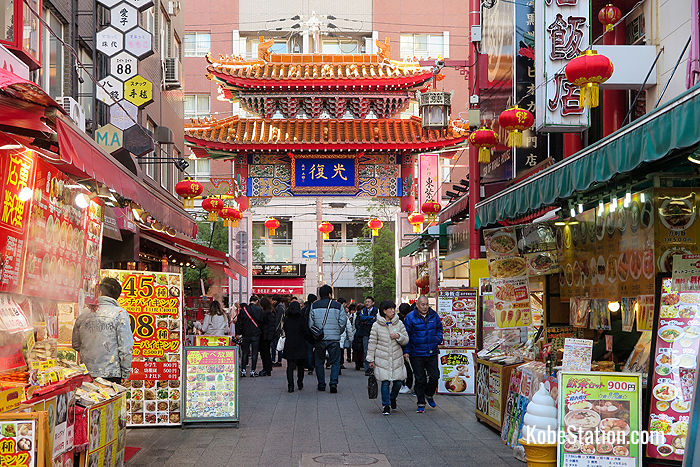 After the port of Kobe was opened to international trade in 1868, a large number of western merchants came here to do business. Many Chinese also arrived at this time, mostly working for Europeans and Americans as cooks and servants. These early Chinese emigrants came mainly from the provinces of Guandong and Fujian and they settled on the west side of the official foreign residential district. This area then became known as “Nankinmachi” meaning “Nanking Town” after the former Chinese capital city. In the past “Nankinmachi” was the common Japanese term for areas where Chinese settled. However, after the war such areas were mostly renamed and now Kobe’s Chinatown is the only area still called Nankinmachi. Typical occupations for early Chinese settlers included tailors, barbers, and kimono fabric merchants, but of course there were also many restaurants selling Chinese cuisine. By the 1930s the area was very prosperous with many restaurants and market stalls, but this all changed with the coming of war. Many Chinese returned to China at this time, and Nankinmachi was completely destroyed by air raids in World War II. 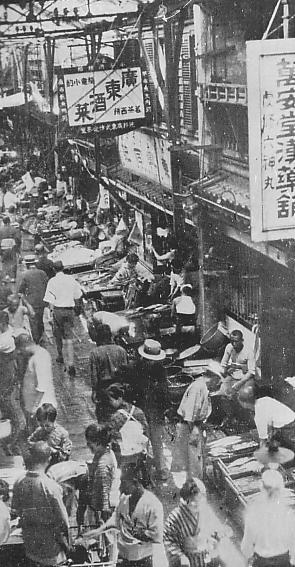 Chinatown in the 1930s. Public Domain

After the war, Nankinmachi became a center of entertainment for occupying US troops, with many bars opening up in the area, and it remained an amusement area for sailors and other foreigners right up until the 1970s. During the 1970s and 1980s, the city government made a deliberate effort to renovate the area and promote Kobe’s Chinatown as a tourist location. During this period Nankinmachi’s current street plan was laid out, its central square built and the eastern and southern gates were erected. 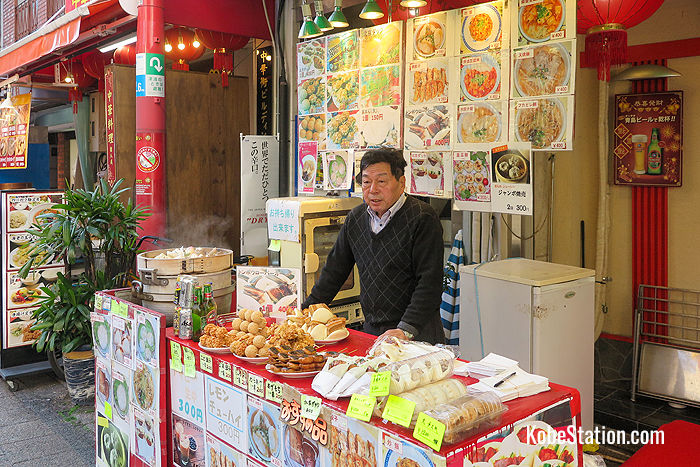 Tragedy struck on January 17th, 1995 with the Great Hanshin Earthquake. Over 6,400 people lost their lives in the disaster and large areas of Kobe were terribly damaged. Nankinmachi also suffered some damage with eight buildings completely destroyed and the Chinese New Year celebrations which were scheduled for January 31st had to be cancelled. Instead on this day, local restaurant owners opened stalls on Nankinmachi Square and served free noodles, soup, dumplings, and croquettes to all who were in need of a hot meal. This community-minded activity became a symbol of hope for Kobe’s resilience in that difficult time. In the days following the disaster, because essential utilities and supplies were not generally available, the restaurant owners in Nankinmachi opened stalls on the street to sell takeout food, propane gas, and bottled water. Shopfront stalls now remain a popular feature of Nankinmachi selling all kinds of street food and snacks to the many tourists who stroll through its streets.

Bordered on the north by Motomachi-dori and on the south by Sakaemachi-dori, Nankinmachi stretches 270m east-to-west and 110m north-to-south. In this small area are crowded around 100 shops and restaurants and also there are many shopfront stalls selling simple Chinese snacks, ingredients, groceries and souvenirs. On weekends and holidays the area is crowded with both local shoppers and sightseers. Here are the main sights of Nankinmachi. 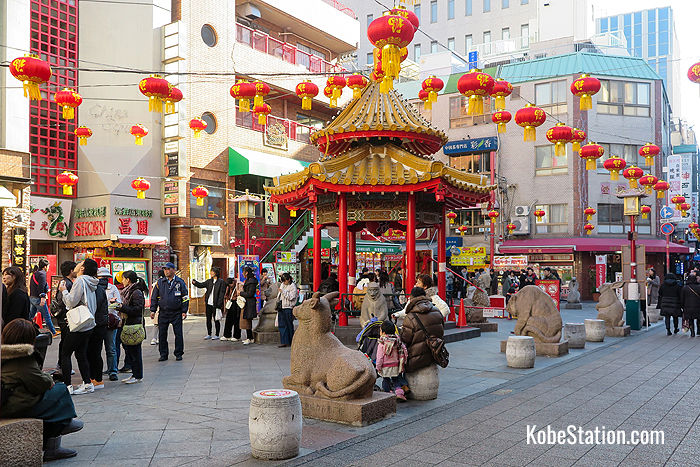 The Azumaya pavilion in Nankinmachi Square

In the central intersection of Nankinmachi is an open plaza called Nankinmachi Square where you can see the Azumaya pavilion which was completed in 1983. This hexagonal gazebo has a two-tier roof, vermilion pillars and stands 6.8 meters high and 3m across. Inside there is a dragon drawn on the ceiling and the pavilion is surrounded by statues of animals from the Chinese zodiac. During the daytime two colorful statues called Shozaishin-ningyo are placed on the south side of the Azumaya Pavilion. These doll-like statues represent the gods of good fortune and are a popular photo spot. 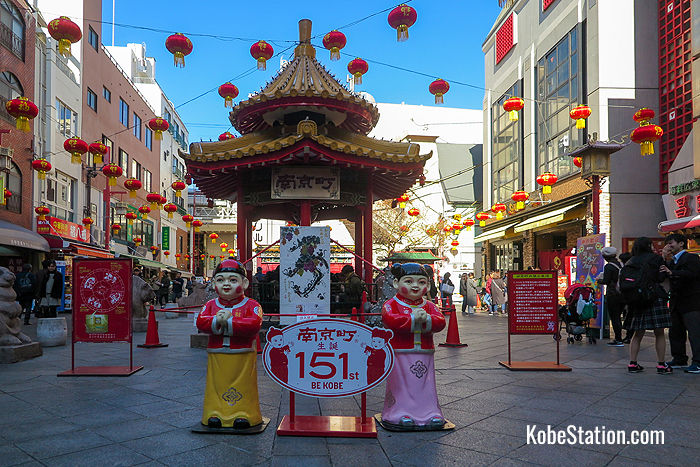 The Garyoden is a traditional Chinese-style building first opened in 1993 which houses a community center. Located to the southeast of Nankinmachi Square, this building is useful to know about as it has public restrooms on the ground floor. “Garyoden” means “lying dragon palace” and there is a large dragon on display in the first floor window that is lying in wait for the annual dragon dance during Chinese New Year. 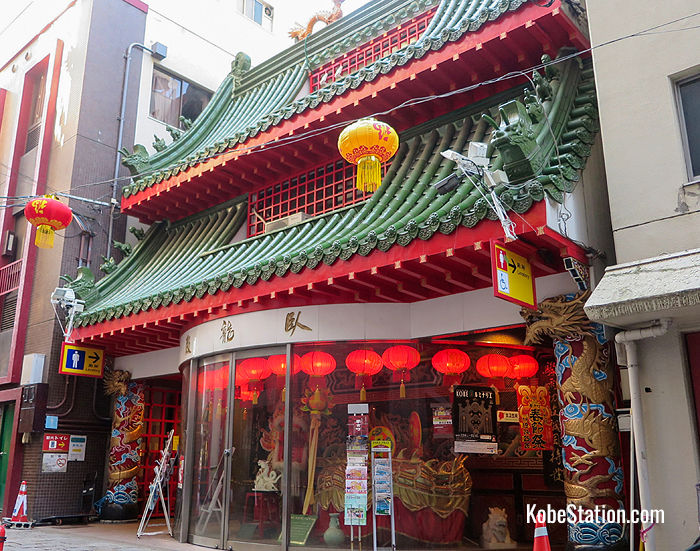 Nankinmachi has three traditional Chinese gates at the east, west, and southern boundaries of the district and a pair of stone lions at the northern entrance. The first of the gates to be erected was the southern Kaieimon Gate in 1982. This gate is 7.6m high and has a two-tiered roof with phoenix and dragon-themed decorations. Originally, this gate was simply called “Nanromon” or “Southern Gate” but the name was changed to “Kaieimon”, which means “Sea Prosperity Gate” in 2006. From that time the gate has been illuminated in the evening. 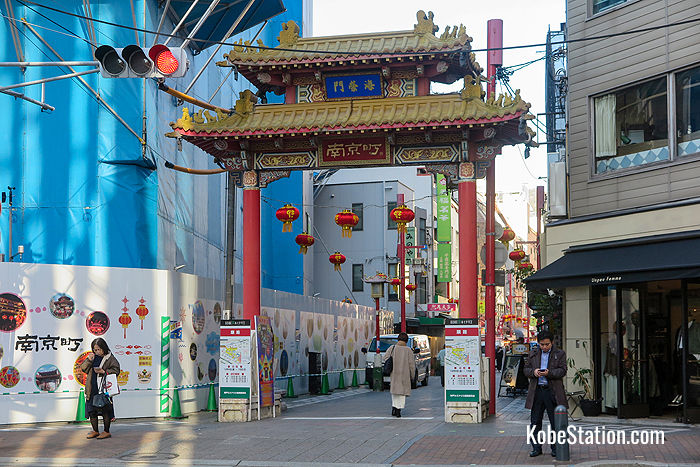 The Choanmon Gate stands at the eastern entrance to Nankinmachi. This 9.8m high gate was erected in 1985 and was built from white marble. The name of this gate means “Long Peace Gate” and like the Kaieimon it is illuminated in the evening. 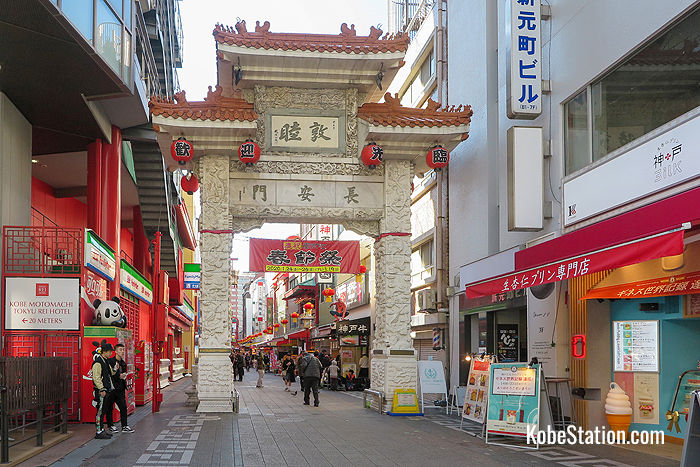 The Seianmon Gate stands at the western entrance to Nankinmachi. This gate was erected in 2005 as a symbol of Nankinmachi’s recovery after the Great Hanshin Disaster in 1995. The gate stands 9.7m high and its name means “Western Peace Gate”. On the inside of the gate the characters 光復 are written, which in the Chinese language means “revival”. 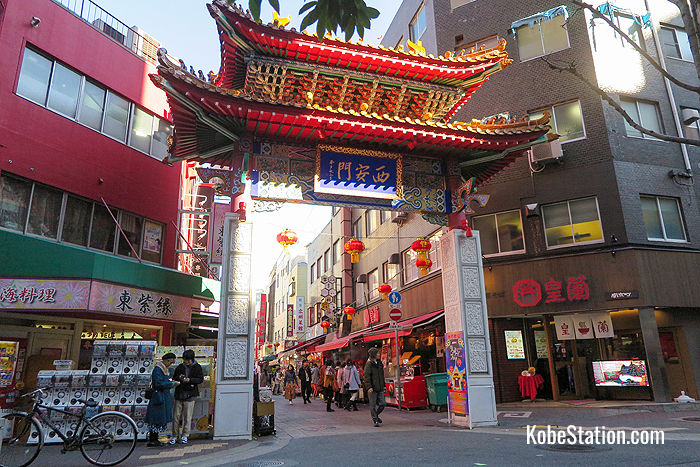 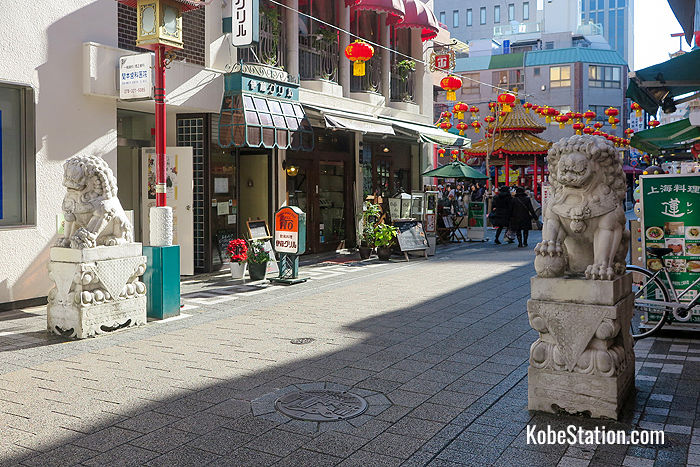 The Stone Lions at Kobe Chinatown

Nankinmachi has a number of famous restaurants, each with their own specialty dish. Here are some of the most popular ones.

Roushouki is probably the most famous restaurant in Nankinmachi. First established in 1915 this restaurant specializes in steamed buns of soft flour dough stuffed with a pork filling. These are called baozi in Chinese or butaman in Japanese. You can either eat in the restaurant or buy to take out. 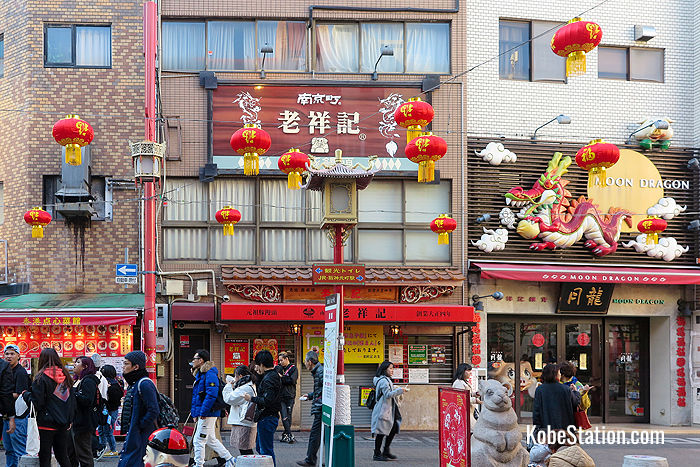 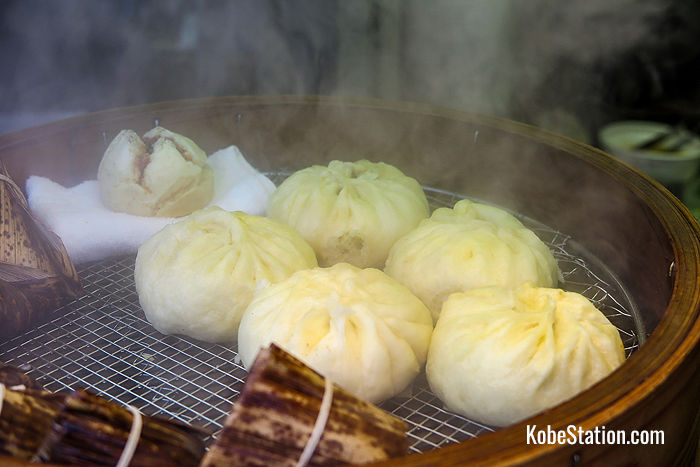 This restaurant is located on the southwest side of Nankinmachi Square so it is easy to find. However, on weekends and holidays there are long lines of people waiting to buy these butaman, so you might have to wait between 30 minutes and an hour. For a shorter wait the best time to go is on weekdays between 10.00 and 11.00 or between 17.25 and 18.15. When this restaurant is closed, their sister shop Soukepaotukan (曹家包子館) also serves butaman and is located nearby on the northeast side of Nankinmachi Square.

This restaurant specializes in Taiwanese steamed soup dumplings called xiaolongbao in Chinese and shoronpo in Japanese. These are steamed buns filled with hot soup and pork, or pork with crab. There are standing counters inside this restaurant if you want to eat in, but most people buy to take away. 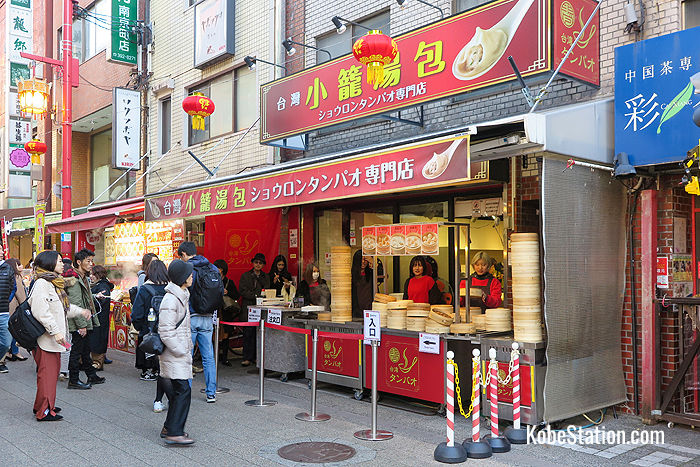 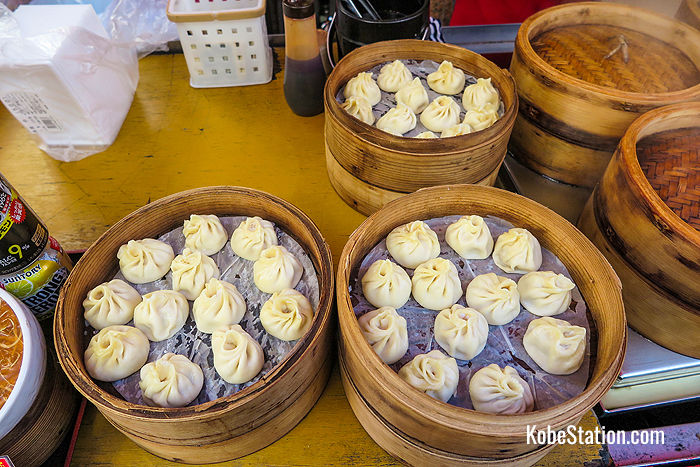 Ryuho is famous for its chimaki: sticky rice dumplings with a savory meat filling and wrapped up in bamboo leaves. Ryuho’s chimaki are made with the best sticky rice from Shiga and stuffed with stewed pork, shiitake mushrooms and shrimp. Also on the menu are various Chinese standard dishes such as butaman, shoronpo, stewed pork burgers, and gyoza dumplings. Eat in or take away. 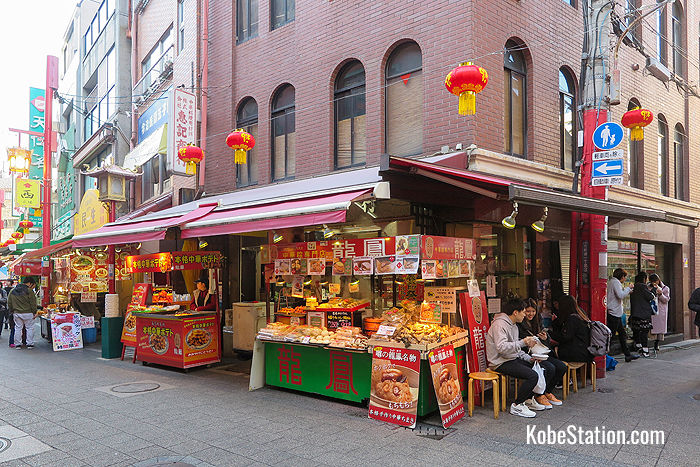 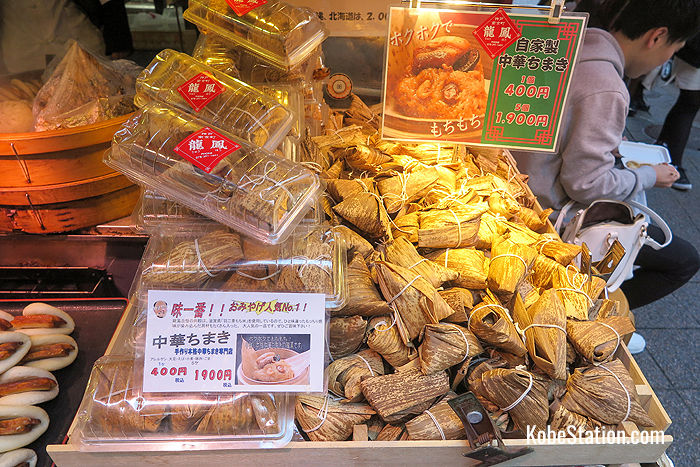 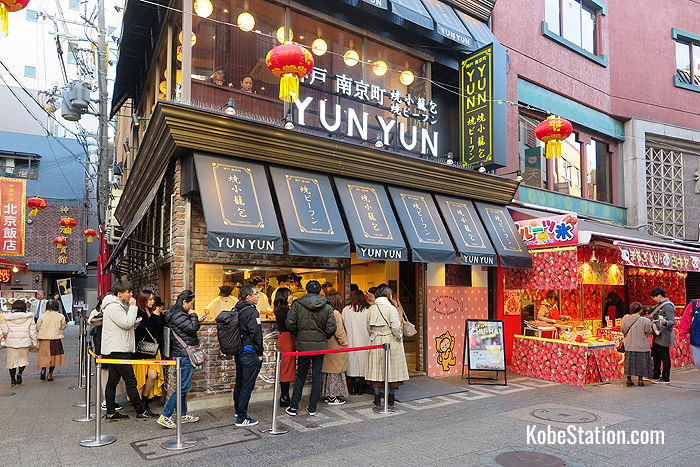 This restaurant specializes in gyoza: minced meat and vegetables wrapped in dough and served with a dipping sauce. Ganso Gyozaen’s gyoza are filled with Kobe beef and can be eaten boiled, steamed, fried, or in an egg soup. Also available at this restaurant are jajamen noodles: thick wheat noodles served with a spicy meat and miso paste sauce. 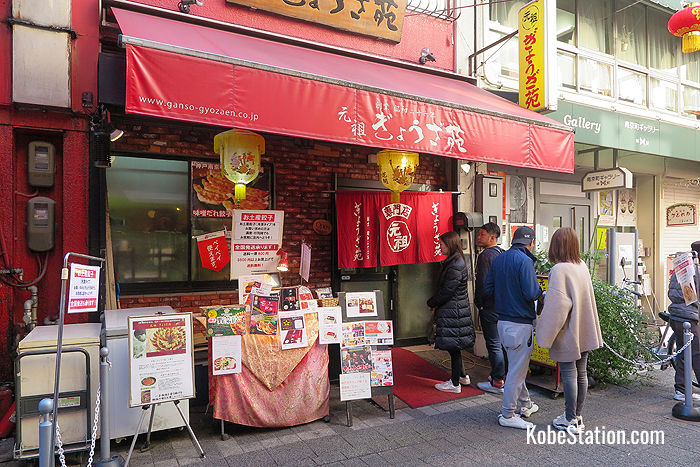 Tapioca bubble tea is a drink which originated in Taiwan, but is now extremely popular in Japan. These two competing tapioca tea shops sit right beside each other just north of the Kaieimon Gate. Both stores serve an incredible range of milk and fruit flavored tapioca teas and coffees, including drinks flavored with matcha (powdered green tea). Alok Tea has an inventive menu which includes Oreo cookie-flavored and cream cheese-flavored drinks. Probably the most popular drink at Dragon Tea is the brown sugar milk with fresh cream. 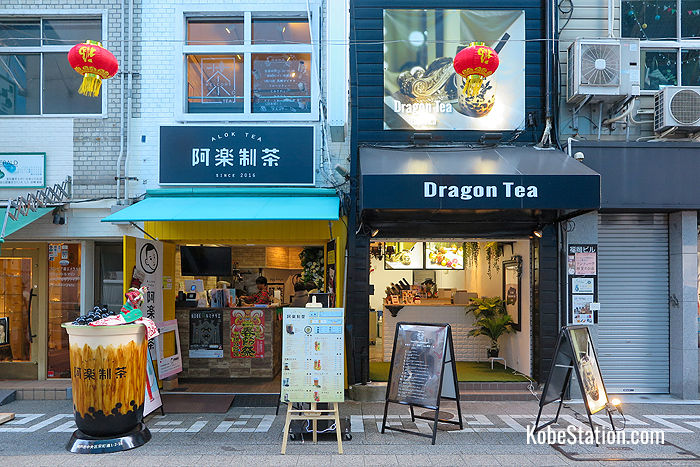 Most of the restaurants listed above are very popular and so are often very busy with long lines of people waiting outside. If you don’t want to wait, try some of the street food on offer at the many street side stalls. Popular dishes include shumai pork dumplings, ramen noodles, and Peking duck wraps. 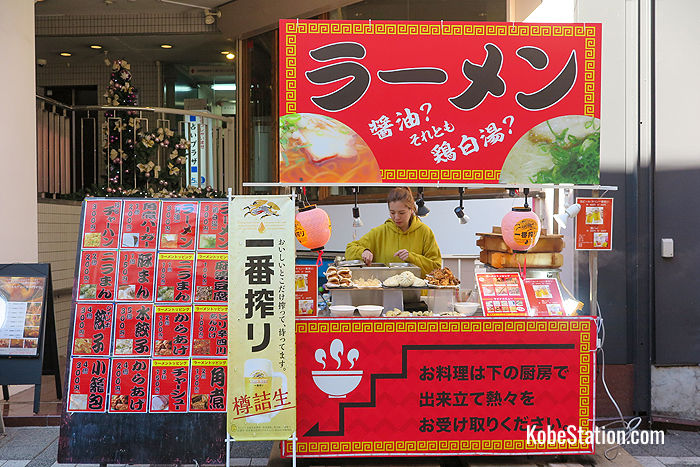 A ramen noodles stall in Nankinamchi 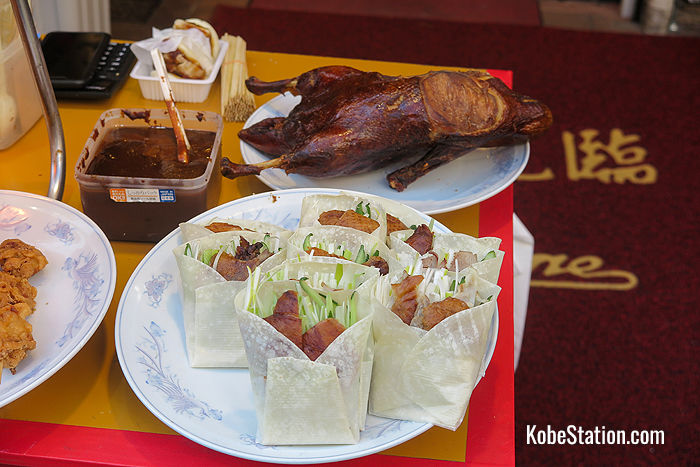 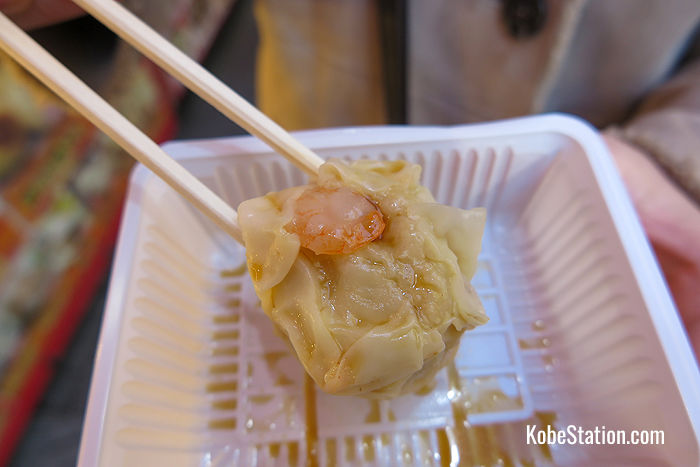 A shumai pork and shrimp dumpling

There are also many souvenir stores dotted around Chinatown where you can buy China dresses, lucky charms, panda-themed toys, and t-shirts. 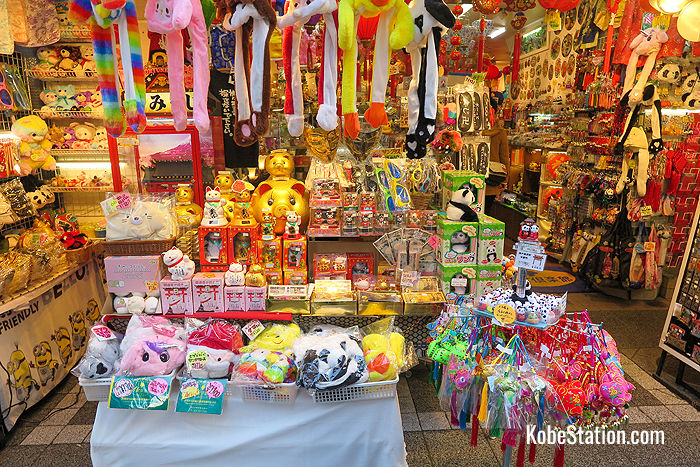 Souvenirs on sale in Nankinmachi

Chinese New Year, also called Shunsetsu-sai, is the biggest event in Nankinmachi and is celebrated each year according to the old lunar calendar for one week sometime between late January and early February. During this festival there are musical performances, lion dances, dragon dances and a dramatic costume parade of famous figures from Chinese history.

The Spring Festival, called Koryushunpu-sai, is held in March or April each year. During this event a variety of traditional performances including lion dances are held in Nankinmachi Square. This event was first held in 2007 and as it is not so well-known, it doesn’t get too crowded.

The Mid-Autumn Festival, also called Chushu-setsu is celebrated for a few days around the night of the harvest moon. A variety of traditional song and dance performances and lion dances take place in Nakinmachi Square. Girls can have their photo taken in a traditional China dress, and children can take part in sticky rice-cake making workshops.

Nankinmachi is a 3 minute walk south of Motomachi Station on the JR Kobe Line, Hanshin Main Line, and Kobe Kosoku Line. Here is a map showing its location.